The Criterion Collection’s Blu-ray release of John Ford’s Stagecoach is a keeper––the film looks better than it has in decades and the disc comes fully loaded with a strongbox full of terrific special features. Unfortunately, the old hash about John Ford’s “discovery” of what would become his favorite filming location is reheated once again in the ironically titled video supplement True West: Harry Goulding and Monument Valley.

You know the story: Indian trader Goulding, worried by the plight of his starving Navajo friends, drives 650 miles to Los Angeles in a rickety old pickup truck––much of the trip on bumpy, unpaved dirt roads, mind you––armed with snapshots of the completely unknown Monument Valley to insist that Ford shoot his new Western there. Ford immediately snaps at the bait, flying pronto to Arizona with a crew of dozens of people–– in one version of the tale he even beat Goulding back to Monument Valley––to heroically save the Navajo and create an iconic American movie location. 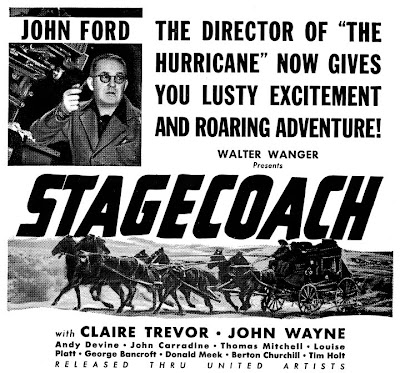 At least that's the way it happened inside the brain of an ingenious studio flack. After spending more than seven years delving into the movies made in northern Arizona I haven’t uncovered a shred of proof that Harry Goulding had anything more to do with Stagecoach than renting the basement of his trading post as dorm room for a handful of crew laborers. Ford and the movie’s other top dogs didn’t even bunk in Monument Valley during filming, they stayed at the actual base of operations, the Wetherill and Colville Trading Post and Lodge in Kayenta, twenty-five miles away. So if Harry Goulding brought together John Ford and Monument Valley, why wasn’t his trading post leased as company headquarters? That seems to be the least Ford could have done to reward Goulding for the trouble he had allegedly taken to broker the deal. What’s more, if Goulding had played such a vital role in bringing Ford to Monument Valley, why was his Navajo rescue mission––surely a press agent's dream story––not mentioned in print until 1953, fourteen years after Stagecoach rolled into theaters and, conveniently, both Wetherill and Colville were dead?

Stagecoach is one of the great Hollywood films, written about and analyzed since the day it hit theaters in 1939, so it boggles the mind that no historian has taken the time to sniff around Flagstaff to dig up the truth about how it was created. The Coconino Sun, the town’s only newspaper in those days, covered Stagecoach‘s production from the moment Ford first came to northern Arizona to scout locations right up to its world premiere engagement––in Flagstaff, by the way, and not Los Angeles (that’s another reality long ignored by historians, but a story to save for another time). 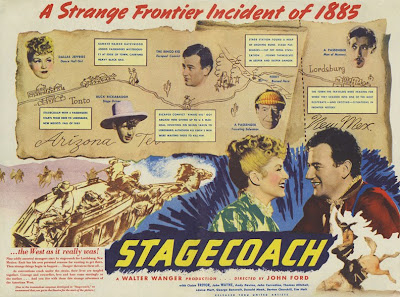 So here are a few documentable, but less than legendary facts: In late September 1938, Flagstaff rancher Lee Doyle, who’d worked as Hollywood’s northern Arizona contact man since 1923, received a telegram from Stagecoach’s production manager asking him to help “look for locations in the Painted Desert and in Monument Valley.”

A week later The Coconino Sun reported that Ford and his associates met Doyle in Flagstaff to begin selecting locations and to make arrangements for bringing in a company of actors and technicians. Ford, Doyle and the rest of the Hollywood group checked into Wetherill and Colville’s in Kayenta; their signatures in the Lodge’s guest register, which survives in the Wetherill family archive, prove the scouting party stayed there for the remainder of their three day visit and not at Goulding’s in Monument Valley. Ford returned to Wetherill and Colville’s when filming began and he shacked there for the entire time he was on location. It's interesting to note that even though some spillover crew members were housed at his trading post, Harry Goulding wasn’t once mentioned by name during the three weeks The Coconino Sun covered Arizona filming.

There are a few other pesky details about the making of Stagecoach that have been ignored by the Ford/Goulding/Monument Valley mythologizers, including MGM records that confirm the studio had a film crew shooting second unit exteriors in Monument Valley for its Mickey Rooney sitcom Out West with the Hardys five weeks before Ford ever laid eyes on the place. What’s more, according to multiple Coconino Sun reports, Sedona was included as one of Stagecoach’s Arizona filming locations, chosen after Ford and his party made “motor trips over the Indian reservation and through Oak Creek Canyon, selecting sites for the different phases of the contemplated picture.” Sorry, movie fans, this buzz isn’t just spin–– it’s fact.––Joe McNeill
Posted by Arizona's Little Hollywood at 5:57 PM