With more than sixty major feature films shot in Sedona between 1923 and 1973, and occasional TV, commercial and other productions ever since, the town holds a special place in movie history. On October 27, 2004, Sedona Main Street Program celebrated that legacy with the first “Hands through History” event. The five guests of honor who helped make movie magic in Sedona – Ernest Borgnine and Ben Cooper, co-stars of Johnny Guitar (1954); Sue Ane Langdon, co-star of The Rounders (1965); Bob Bradshaw, a local rancher who did late-era location scouting; Dwight Brooks, director, producer and CEO of Sedona Movie Studio, a local production company; and A.C. Lyles, the legendary Hollywood producer whose series of westerns breathed life into the genre in the 1960s – attended a cocktail party where granite plaques, each with their images and signatures, were unveiled.

After introductions and the screening of vintage film clips, the guests of honor cast their handprints in concrete slabs, which would be installed in Uptown Sedona in August 2006 as part of the Uptown Enhancement Project for streetscape beautification. 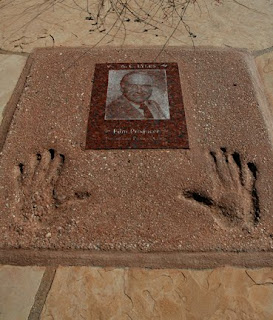 Borg­nine recalled that when he first came to Sedona “it was just a little hamlet, a little tiny town…there weren’t very many people here. Then, BAM! Next thing you know, it’s a city.” Cooper recalled that Sedona Lodge, headquarters for the Johnny Guitar company during their stay “had a big mess hall and they would bring in platters of food; they would have a platter of pork chops piled high, a platter of steaks piled high.” When asked if she had the chance to sightsee while shooting The Rounders, Langdon replied, “It was mostly just work, work, work – but where we worked was sightseeable. Where is there a place that’s not sightseeable here?”

A.C. Lyles, who’s worked for Paramount Pictures since 1928, was serving as a consultant to HBO’s Deadwood at the time and bursting with pride at the show’s success. “We just opened in England,” he said, “it’s been on four weeks and already is the highest-rated drama on Sky Network,” a British pay-TV service.

Actors Clint Walker, Edd “Kookie” Byrnes, Robert Horton, and Morgan Wood­ward were the guests of honor in February 2005 when the second “Hands Through History” evening brought more of the greats from Sedona’s western movie past back to town. Walker, who filmed Yellow­­stone Kelly there in 1959, joked, “It’s been 18 years [since my last visit]; most of this wasn’t here. I wondered, would I be able to find my way around?” His Kelly co-star, Byrnes, called that film “my favorite western that I’ve done.”

Robert Horton said, “I first saw Sedona [when we filmed] Pony Soldier in 1952. My wife and I came back in 1989 and it had changed; but the red rocks didn’t change, and I think the city should be very proud.”

Movie tough guy Morgan Wood­ward showed he has a soft spot for our town. He noted he filmed Firecreek here in the late ‘60s and “I can see that both of us have changed a great deal. I’m delighted to be back to celebrate this marvelous historical event that you’re carrying forward. Sedona is an absolutely beautiful place and I’ve never been among friendlier people.” 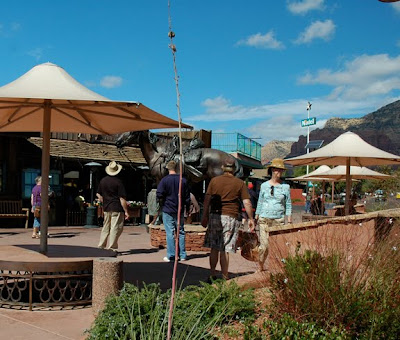 A third “Hands Through History” event was held in May 2005, honoring Randolph Scott (Gunfighters, 1947), Tyrone Power (Pony Soldier, 1952), James Drury (The Last Wagon, 1956) and Dick Jones (The Strawberry Roan, 1948) for their roles in Sedona movies. Actress Donna Martell represented the deceased Scott, her co-star in the Tucson-filmed Ten Wanted Men (1955); Tyrone Power Jr. stood in for his father. To date, the last Sedona film star honored by Sedona Main Street Program has been The Strawberry Roan’s Gloria Henry, who cast her handprints in concrete during a visit to town in September 2007.––Joe McNeill
Posted by Arizona's Little Hollywood at 10:06 AM