Sedona Fashion Gets Back in the Saddle!

A lot has changed in Sedona, including fashion, since Zane Grey’s The Call of the Canyon was filmed in the area in 1923, but the red rock skylines aren’t really fazed by the years. While Arizona’s Little Hollywood was in the works it was exciting to find that many of the backdrops from some of Red Rock Country’s most famous films are still accessible and unimpeded by houses and strip malls – what better locations for showcasing hot Western wear? Paris and New York may have the runways, but we have the red rocks. Even our well-heeled models agreed: Nothing compares to Sedona’s natural beauty (not even the chunky turquoise jewelry that had everyone at the photo shoot making their Christmas wish lists early). So saddle up and take a look at Sedona scenery and fashion, then and now. What would you rather be wearing?––Erika Ayn Finch 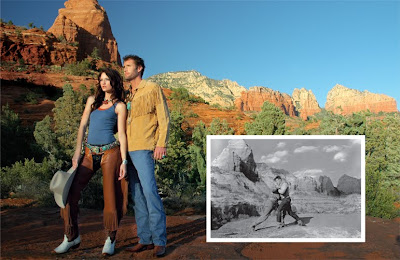 Inset: George O’Brien and Noble Johnson fight to the finish in Mystery Ranch (1932, Fox Film Corp.). Photographed in Sedona in 1932. 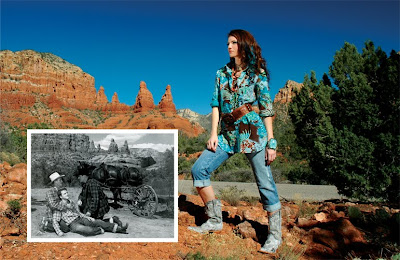 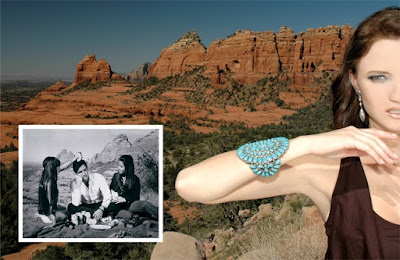 Inset: Elvis Presley and unknown starlets in a publicity shot from Stay Away, Joe (1968, MGM). Photographed in Sedona in 1967. 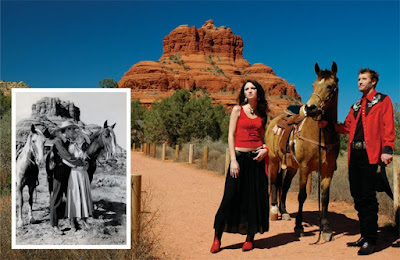 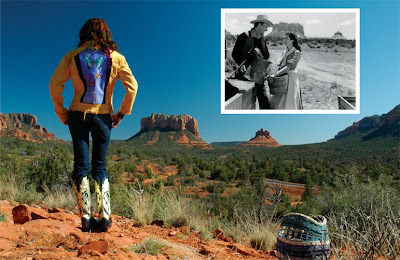 Inset: John Wayne and Gail Russell in Angel and the Badman (1947, Republic Pictures). Filmed in Sedona in 1946.
Posted by Arizona's Little Hollywood at 9:19 AM