Northern Arizona has some beautiful sights––you just might never guess any of them were natural or outdoors after a viewing of Ameri­can An­them, one of the rare Holly­wood films shot on location there in the 1980s. Rather, through its odd lens, we see an Oak Creek Canyon where local beauty is defined by aspiring gymnasts with perfect hair and teeth. Indeed, we can forgive Ameri­can An­them viewers for thinking Flagstaff is a town of buff young residents spawned from genetic engineering experiments financed by a modeling agency and the lycra industry––but, unfortunately, not an acting school. 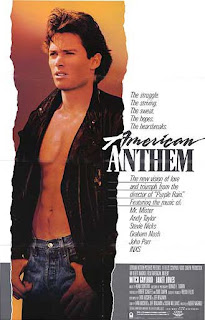 Yet at the time, Anthem’s story of gorgeous yet angst-ridden aspiring Olympians probably gave its producers good reason to think they were going for the gold. Young audiences in the Reagan era did backflips for its brand of coming-of-age movie. Like Risky Business (1983), Dirty Dancing (1987), even 1984’s Breakin’ 2: Electric Boogaloo (starring the one-and-only Boogaloo Shrimp), Anthem features young hunks and babes learning about themselves, finding love and butting heads with older folks who Just Don’t Understand. In Anthem’s case, the young and the leotarded just happened to live in Northern Arizona. It boasts every cliche of a vintage ’80s date-night film, making the movie a time capsule not of what life in America was really like in those days, but of that era’s self-consciously hip filmmaking trends. A DNA test on its script would find dominant genetic strands of Flashdance (1983). Like the earlier film, it’s got plenty of strobe lights and shots of flowing water bouncing off taut flesh during backlit workouts. As if that wasn’t enough, Anthem has its lead character, played by real-life Olympic jock/first-time actor Mitch Gaylord, welding – just like Flashdance’s Jennifer Beals – to the very same pulsating beat. As icing on its cake, Anthem throws in some schmaltzy 1970s’ vintage Rocky heartstring-tugging, all wrapped in flashy visual packaging inspired by music videos. MTV was still only a few years old, and its hip, edgy ability to attract young audiences was the envy of every other form of media. Moviemakers in particular scrambled to copy the MTV form, hoping to gain some refracted cool: Music was the star, rapid-fire editing sought to grab short attention spans, and in more cases than Holly­wood would ever have dared to admit, plot took a backseat to style. Let American Anthem stand as Exhibit A.

The razor-thin story finds Steve Tevere (Gaylord) at a crossroads. He had it all: High school football stardom, world-class potential in gymnastics, popularity with his fellow dudes and a loving, supportive family. Suddenly, his father loses his job, and Steve is forced to make adult decisions for the first time. Should he follow his dream of competing for a spot on the U.S. Olympic gymnastics team? Or should he dilute his pursuit and continue working as a mechanic to pitch in when his family needs him most?

Deep down, Steve has an even bigger question he needs answered: Can he ever win the respect of his self-pitying, T-shirt-wearing dad?

Obviously, romance has to come into this mix. Cue the arrival of Julie Lloyd (Janet Jones), a beautiful gymnast who’s left New York to prove something to herself and her family (they don’t understand, either). Together, against the daring and competitive background of the gymnastics world, Steve and Julie resolve their personal crises; Steve even wins a warm, approving grin from his misty-eyed dad – now wearing a crisp sports shirt!

For Mitch Gaylord, who won a gold, a silver, and two bronze medals in gymnastics at the 1984 Los Angeles Olympic Games, his acting debut was a revelation. “I had no idea how much work went into making a film,” the then-25-year-old said at the time,“and the best way I can describe it is that it’s like a giant jigsaw puzzle they put together piece-by-piece – a group effort, not just the actors and the director. It’s like you’re part of a team really creating something.”

Janet Jones, then 23, had her first starring role as Julie in Anthem, after small roles in The Flamingo Kid (1984) and A Chorus Line (1985). As a senior in high school, Jones represented her hometown of St. Louis as a disco dancer competing on the TV show Dance Fever. She became a series regular, and in 1988 married hockey legend (and future Arizona Coyotes head coach) Wayne Gretzky.

Arizona locations were key to Magnoli’s “vision”: “It’s important for me to bring a certain style to the picture and when I came to Arizona and saw the colors of the landscape it was obvious what that would be. If you use very definitive combinations of certain colors and images in an artistic fashion, something starts to happen in the audience. And it’s that visceral reaction we’re going for.” He added that “the isolation, the majestic mountains and dramatic skies provided the perfect setting for the characters in this story.”

Perfect – except that, due to the MTV-style breakneck editing, the “majestic mountains” of Sedona are seen only in a few quick flashes. In fact, most filming took place away from the red rocks, in the surrounding Coco­­nino National Forest, including the scenes that take place at Steve’s treehouse (see, I told you he had some growing up to do!) and at his secret practice space (where Gay­lord spends a lot of time spinning on a high bar mounted between two trees). One of the film’s better set pieces, a wild ATV chase through the forest that climaxes with Steve’s kid brother Mikey (9-year-old actor R.J. Williams) hanging from a high cliff, was shot on a road cut to the rim of Oak Creek Canyon especially for the film.

Nobody did summersaults over the reviews that greeted American Anthem when it opened in June 1986; Roger Ebert, for one, dissed it as “dumb and predictable.” It took in $4.8 million in the U.S.; the year’s box-office champ, Top Gun, another slick MTV-ish flick, took in $176.8 million – and not once did Tom Cruise walk on his hands dressed in day-glo.

The Anthem performance of Gaylord – who would later be “part of a team really creating” Ameri­­can risciò (1990, aka American Tiger), Animal Instincts (1992) and Sexual Outlaws (1994) – scored him a Razzie Award nomination as “worst new star.” In perhaps the cruelest cut of all, he lost to Howard the Duck.––After decades of obscurity, American Anthem was released on DVD in 2009 as part of the Warner Archive Collection.
Posted by Arizona's Little Hollywood at 9:40 AM