I’m not surprised that the chapter in Arizona’s Little Hollywood raising most eyebrows is the one on Der Kaiser von Kalifornien, the obscure 1936 Nazi propaganda Western filmed in Arizona and California. Let’s face it, the idea of a rootin’ tootin’ goosesteppin’ buckaroo is foreign to most Americans. But the Nazi Western didn’t just materialize out of nowhere, it evolved from a legion of cowboy entertainment that began filtering into German culture during the nineteenth century. Luis Trenker’s screenplay for Der Kaiser (which he also starred in) was influenced by the writing of Karl May, whose adventures of the fictional Mescalero Apache chief Winnetou and his Teutonic companion Old Shatterhand in the Wild West remain the German-speaking world’s biggest-selling series of novels. The swastika, then known as a Native American symbol for good luck, was often incorporated into the illustrations of the Winnetou books; some historians suspect this is where young Adolf Hitler, a May fanatic, first encountered it. None of May’s Western tales reached the screen until 1962, when the West Germany/Yugoslavia co-production Der Schatz im Silbersee (The Treasure of Silver Lake), a loose adaption of his 1890 novel was a smash hit, blitzkrieging continental box offices and sending the Eurowestern movie craze down a trail that would wind directly to The Man With No Name.

May never set booted foot in the American West and neither did Erich Rudolf Otto Rosenthal, a wildly popular German stage performer who adapted the handle “Billy Jenkins” and was billed as Der Koenig der Cowboys (The King of the Cowboys) while Roy Rogers was still in fringed diapers. Jenkins was the Teutonic equivalent of “Buffalo Bill” Cody, the sharp-shooting front man of a traveling Wild West show that toured Germany and other European countries for more than two decades before the Nazis seized power. Even though he was half-Jewish, Jenkins became a member of the Nazi Party in 1933 and at the same time changed his surname from Rosenthal to Fischer, his Gentile mother’s maiden name. Granted Aryan identity papers and official sanction by the Nazis, he remained active as a cowboy showman well past the start of World War II.

Like the Amerikaner Buffalo Bill, Jenkins was the hero of dozens of popular German-language pulp novels, often partnered in his fictional adventures with a Native American sidekick named Hunting Wolf. Despite decades of popularity, Jenkins never appeared in a feature film, although there were a number of Western movies made in Germany dating back to the silent era. As late as in the closing days of the Weimar Republic, a little more than two months before Hitler became Reich Chancellor, Der Goldene Gletscher (The Golden Glacier, 1932), a talkie Western drama about political corruption set during California’s Great Gold Rush of 1849, was playing in German cinemas. 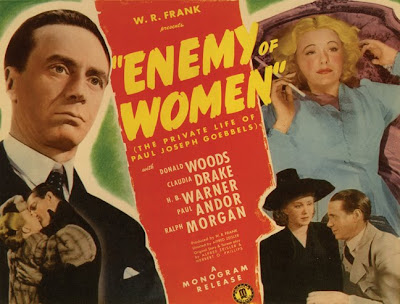 Der Kaiser may have been the only Nazi Western to shoot scenes on location in the United States, but there were a trio of others produced during the Third Reich: Wasser für Canitoga (Water for Canitoga), the comedic Sergeant Berry (both starring German matinee idol Hans Albers and directed by Herbert Selpin, who it is believed was murdered by the Gestapo in 1942 for openly criticizing the German navy during production of the anti-British melodrama Titanic), and another genre parody, Gold in New Frisco, directed by Paul Verhoeven, an actor who played a supporting role in Der Kaiser; all three films were corralled into theaters in 1939. Both Berry and New Frisco were released with English-language titles, perhaps in an attempt to make German audiences think they were Hollywood product, and not surprisingly, three of the four Nazi Westerns fixate on the lure of gold and the lethal greed of American free enterprise. 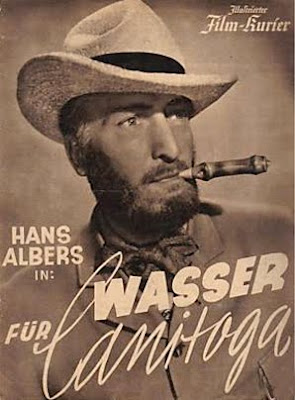 Wasser für Canitoga’s plot revolves around the shopworn cowboy movie cliché of capitalist schweinhund sabotaging the water supply of a gold mining town, but the film also has a musical production number that foreshadows the glitzy rawhide extravaganzas Roy Rogers would churn out at Republic Pictures during the 1940s (although the slight bawdiness of “Good bye Jonny, Good bye Lilly,” the tune warbled by Hans Albers, would have brought a blush to the cheeks of “Queen of the West” Dale Evans). The idea of fascist cowpokes crooning a cabaret ditty in a Wild West saloon (which even has a revolving disco-style mirror ball hanging from the ceiling over the dance floor) may seem weirdly off kilter to Americans who grew up visiting Miss Kitty’s Long Branch saloon on TV, but “Good bye Jonny” enjoyed musical life far beyond Canitoga and went on to become a pop standard on the Fatherland’s Hit Parade. After the fall of the Third Reich, “Jonny’s” political loyalty stampeded stage left when its tune was appropriated as the basis of “Auferstanden aus Ruinen” (“Risen from Ruins”), the national anthem of Communist East Germany from 1949 until Deutschland’s reunification in 1990. The anthem’s music is officially credited to left-leaning composer Hanns Eisler, who fled Nazi Germany for the United States in 1933 to avoid persecution for his political views; by the late 1940’s the composer was accused of being “the Karl Marx of music” by finger pointers on the House Committee on Un-American Activities and he voluntarily returned to East Germany. But in 1950, West German tunesmith Peter “King of the Evergreens” Kreuder had a showdown with Eisler in the International Court of Justice, charging that the opening measures of “Ruinen” was plagiarized from “Good bye, Jonny,” which he had co-written eleven years earlier with lyricist Hans Fritz Beckmann.

The Western movie continued to be used as a propaganda tool in Germany well past the end of open warfare. In 1966, East Germany’s state run Deutsche Film-Aktiengesellschaft studio (popularly known as DEFA) kicked off a series of ideological “bratwurst” Westerns that featured Native Americans as the good guys and whites as the villains, a concept that allowed for transparent propagandizing of Yankee “imperialism.” The first of these Indianerfilms, Die Söhne der großen Bärin (The Sons of Great Bear), was adapted from a novel written by East German communist author and historian Liselotte Welskopf Henrich. Directed by Czech Josef Mach, with up-and-coming Serbian actor Gojko Mitić starring as Sioux warrior Tokei-Ihto, these Marxist cowboy and Indian yarns added a Cold War spin to the “Plight of the Red Man.”–– Joe McNeill
Posted by Arizona's Little Hollywood at 8:49 AM