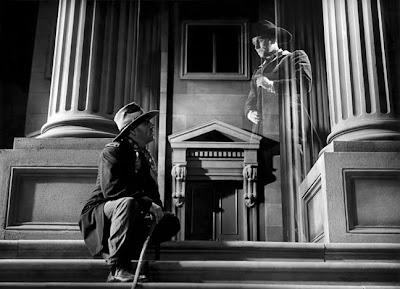 “The Stranger” (Bernhard Minetti) appears to Johann Augustus Suter (Luis Trenker) on the steps of the US capitol with a vision of America’s future industrial might in the 1936 Nazi Western Der Kaiser von Kalifornien.

“I have lived in Arizona for 55 years and studied our unique history for at least 30 of those years, and I thought I knew a thing or two about the history of movies filmed in Arizona, but Joe McNeill’s new book knocked me right on my butt,” says Bob. “I had no idea how much of our film history has been mangled and flat-out forgotten (and, I'll bet you will agree). This is really a treasure chest of invaluable information for anyone who cares about a critical period in Arizona's long film history.”