Rex, a.k.a. “King of the Wild Horses,” was a lot like human movie royalty: Captivating onscreen, out of ­control off it. His name may not be on the tips of people’s tongues these days, but Rex was a Roaring Twenties superstar, the first horse to get billing over human actors and a major box office draw in the late-silent period; his biggest hit, Black Cyclone (1925), was a blockbuster that reportedly grossed the then-astonishing sum of four million dollars. But Rex was also Hollywood’s original wild child, by all accounts one cantankerous critter, and stardom never reigned in his antisocial––okay, make that psycho––personality. 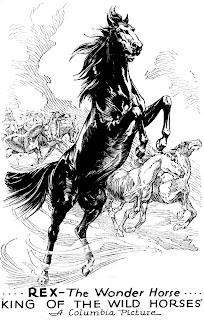 Beastly Rex had a tendency to violently assault any human that got too close and sensible actors refused to go anywhere near him, even though he always had a restraining rope tied around his foreleg out of camera view while filming. Years after their encounter, one old wrangler who’d worked with the Wonder Horse sputtered with awe, “I seen him throw an actor twen’y feet, once, an’ then tear his clothes right off him with his teeth!” Legendary stuntman Yakima Canutt, who had a chunk of his face removed by Rex while filming The Devil Horse in 1926, remembered his co-star as “a big, beautiful well-trained black, but every so often he would get mad and try to kill anyone near him.”

Rex was the blue-ribbon celeb in the movie livestock company owned by Flagstaff rancher/studio contact man Lee Doyle that included most of his regular four-hoofed co-stars: Lady, the heroine; Marquis, the villain; Paris, suspiciously described in a contemporary press report as “the juvenile and female impersonator,” and Moe and Eva, low comedy relief burros. Rex sired four look-alike offspring and he and his family appeared in almost half the movies made in Sedona during the 1930s, low budget kid pictures like Stormy and King of the Sierras that helped keep the area on Holly­wood’s radar until more expensive “A” Westerns made a comeback at the tail end of the decade. 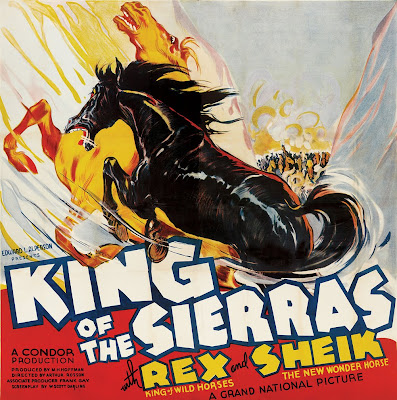 Doyle bought Rex from Fox Film in 1931, but the “King of Wild Horses” was no stranger to Arizona. He’d filmed Universal Pictures’ Wild Beauty in Stafford, southeast of Phoenix, in 1927, and in August 1930, Fox began shooting a remake of Tom Mix’s Just Tony that it first titled Alcatraz, then changed to Wyoming Wonder and finally to King of Wild Horses that was to team Rex with newcomer John Wayne, fresh off his first starring role in The Big Trail. Unfortunately, the Rex/Duke team-up–– the “Star Steed” had more prominent billing in trade ads than Wayne––was permanently shut down after two days of second unit filming in Flagstaff.

Three years later, Rex had the lead in another picture titled King of the Wild Horses that has long been listed by some Sedona movie buffs as part of the area filmography––a few amateur historians even name local beauty spot Red Rock Crossing as a specific location site––but solid evidence that the Wild Horses production spent any time in Sedona has yet to surface. On the contrary, contemporary newspaper reports, Columbia Pictures’ publicity materials, and the American Film Institute Catalog all say that King of the Wild Horses was filmed on locations north of Flagstaff, primarily on the Navajo and Hopi reservations, as well as at Blue Canyon near Tuba City, and Fredonia in Coconino County. No existing print of King of the Wild Horses is available for viewing and not a single photograph or contemporary reference has been uncovered indicating any scenes from the film were shot in Sedona. 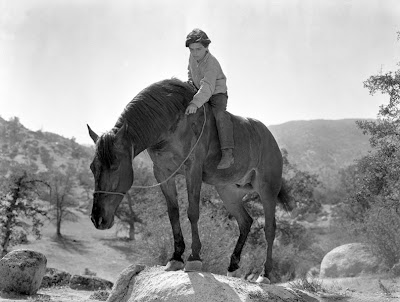 14 year-old Frankie Darro rides a chillin’ stand-in for the chilling Rex in the 1931 Mascot Pictures serial The Vanishing Legion.

Unstable Rex has been stabled in the Great Beyond since the 1940’s, but his superstardom was permanently memorialized in a kitschy painting created by child actor-turned-artist Charles de Ravenne that hung for years in the lobby of the Hollywood Roosevelt Hotel in Los Angeles. Titled “Hollywood Comes to Napoleon’s Aid, ” it depicts Napoleon riding across a wheat field followed by his staff, impersonated by some of the most recognizable Hollywood VIPs of the day. Rex is portrayed as a horse of a different color, docilely carrying natty character actor Adolphe Menjou (depicted as French military commander Marshal Ney) astride him. Also in the painting is another picture show stallion with a Sedona connection, silent cowboy star Fred Thomson’s Silver King, carrying United Artists head Joseph M. Schenck as a colonel of the Cuirassiers (artist De Ravenne appeared in Thomson’s 1924 FBO Western Thundering Hoofs when he was seven years-old). Other Tinseltown notables in the painting include Douglas Fairbanks Sr., who is pictured as a member of the Hussards de la Garde; le Maréchal Sid Grauman, Hollywood’s Chinese Theatre showman; William Powell as a Napoleon aide de camp; Ronald Colman, Clive Brook, John Gilbert and Erich Von Stroheim as Grenadiers; Groucho Marx as a dead trumpeter; and Charlie Chaplin as a drunken priest, clutching a bottle of champagne and refusing a drink of brandy from vivandière Marion Davies. It’s a sure bet that in real life bad boy Rex would have been vexed by the lot of them.––Joe McNeill
Posted by Arizona's Little Hollywood at 3:45 PM