Will You Save Zane Grey’s The Last of the Duanes? 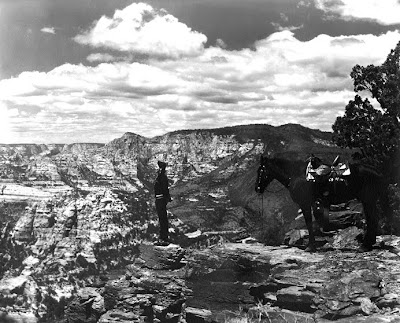 The Last of the Duanes star George O’Brien takes in the view from Sedona’s Schnebly Hill.

Imagine having the opportunity to step back in time and see Sedona long before its development, with nothing intruding on its stunning natural scenery for as far as the eye can see. That’s what you get in 1930’s The Last of the Duanes, the first talkie shot in Sedona and the oldest surviving Hollywood feature filmed on location in Red Rock Country. Eighty-years years later, it offers an incredible historical record of the town – if we could see a clean copy. Collectors swap weak-looking bootleg DVDs, but with a little detective work, a 35mm print of Duanes was tracked down at the George Eastman House International Museum of Photography and Film in Rochester, N.Y., from which a nearly pristine exhibition print of the film could be struck – if someone steps up to underwrite the costs of the final restoration work.

For years, the film was feared lost in a 1937 fire that engulfed a Twentieth Century–Fox film vault in Little Ferry, N.J., destroying the negatives of most Fox silent films and early talkies. But when the company hired British-born Alex Gordon, a producer of B-movies such as 1956’s Shake, Rattle & Rock and 1957’s Dragstrip Girl, he instituted a restoration program that located more than 30 missing Fox films, including Duanes.

In the 1960s, Gordon parceled the studio’s remaining vault materials out to various archives for preservation. The films are believed to have been divvied up among the UCLA Film and Television Archives in Los Angeles, the Museum of Modern Art in New York and Eastman House.

Caroline Yeager, an assistant curator at Eastman House, says the museum holds a restored, tinted black-and-white nitrate print, as well as an acetate and safety negative. Its holdings would yield a clean print that could be screened in a theatre with a little more cleanup work that “I would estimate would cost between $8,000 and $10,000,” Yeager said.

We ask anyone with a serious interest in underwriting the restoration of Duanes, preserving this landmark of Sedona history for the next century, to please contact us for more information at info@sedonamonthly.com.––Erika Ayn Finch
Posted by Arizona's Little Hollywood at 11:04 AM