He Went Looking for America...and Found it

Every one of Dennis Hopper’s obituaries acknowledged the greatest achievement of his long Hollywood career: Easy Rider, the landmark (and dope-soaked) 1969 counterculture road epic he c0-wrote, directed and starred in. A few obits even mentioned that parts of it were photographed in New Mexico, Texas, and Louisiana, but not surprisingly, none brought up the fact that some of the movie’s best scenes were filmed in northern Arizona. 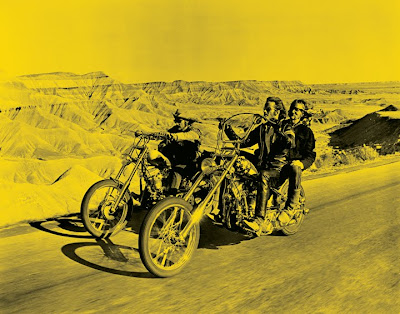 Easy Rider was shot on a trip from Los Angeles to New Orleans with stops in Arizona at Bellemont––the shell of the old Pine Breeze Inn, where drug dealing bikers Wyatt (Peter Fonda) and Billy (Hopper) are refused a motel room, still stands on Route 66––Wupatki National Monument (our antiheroes camp out and bogart a couple of joints among the Anasazi Indian ruins), the Painted Desert, Monument Valley and Flagstaff, where the fibreglass giant waving lumberjack on South Milton Road and the now-defunct Canyon Hotel on Leroux Street can be spotted during the main title sequence. The old adobe building near the San Francisco Peaks that once housed the Sacred Mountain Esso gas station (where the boys tank up before biking into the desert) is still there, too, although it is a stuccoed private residence today. So keep off the grass, hippies.

According to the film’s pressbook, Hopper and his crew kept on trucking until they found locations that they felt best fit the needs of their story about a man "who went looking for America and couldn’t find it anywhere.” When they discovered a photogenic spot to their liking the group would stop, set up cameras and then look for "real Americans" to add a buzz of realism to the scene.
Posted by Arizona's Little Hollywood at 3:23 PM