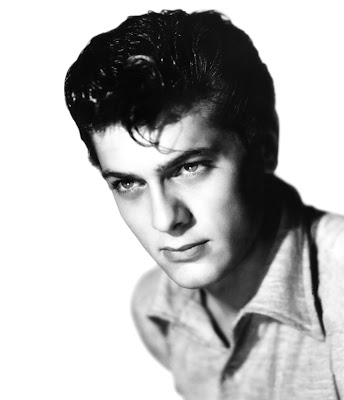 Tony Curtis has a name and a face that people can place. One of the most popular of the postwar movie stars, the New York-born Curtis was as famous for his thick black hair –– Elvis readily admitted copying his conk –– and New York accent as he was for his talent and natural screen charisma. Curtis has starred in dozens of enduring crowd pleasers, but his résumé also includes some of his generation’s defining films: Alexander Mackendrick’s Sweet Smell of Success (1957), Stanley Kramer’s The Defiant Ones (1958, for which he received a Best Actor Oscar nomination) and Stanley Kubrick’s Spartacus (1960). In June 2000, the American Film Institute ranked Billy Wilder’s 1959 Some Like it Hot, in which Curtis co-starred with Marilyn Monroe and Jack Lemmon, as No. 1 on its list of “100 funniest American movies of all time.” At the height of his celebrity in 1965, Curtis even voiced a character on The Flintstones TV series, “Stony Curtis,” a thinly disguised caricature of himself.

Although he’s still acting (most recently in the 2008 indie David and Fatima), Curtis devotes much of his time to his art, which encompasses painting, drawing and constructions made with found objects. His work is exhibited internationally; you can see some of his work at his Website, www.tonycurtis.com.

I visited Curtis at his home in Las Vegas in July 2009 to chat about Hollywood, art and the old neighborhood back in Manhattan.––Joe McNeill

JM: Have you ever been to Sedona?

TONY CURTIS: I’m not sure. When I was making movies as a kid with Universal, they’d send us out on location and we had locations all over Arizona.

When you were a kid in New York, you wanted to be an actor. Did you ever see a day when you’d be a full-time artist?

I never paid that much attention to it. I got into [art], but not that into it. I was going to wait for an opportunity. But you don’t sit at home and wait. You think about what else you’d like to do. 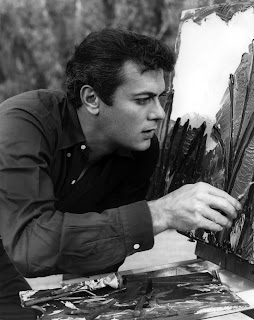 I thought, well, I’d like to be an actor, so I saw a lot of movies. I’d like to be an athlete, a wrestler, so I extended myself in all these areas. I liked stories. I couldn’t write because I had a very poor education – there was no schooling of any kind – so I had no inclination toward being a writer. I had an inclination to be anything and everything I wanted, but I couldn’t because I didn’t have the ability to do it. I would have loved to have been a scientist. Couldn’t do it. A doctor. Couldn’t do it. I could have been any one of those because they all created an imagination. They were all rooted in imagination. I had an imagination. Not that that was good or bad. I had to calm my imagination because I couldn’t do [everything I wanted to do]. There were so many things I could have done.

You did a lot.

Well, I played around a lot. I had one excellent gift, which I have nothing to do with: I was the handsomest kid on the block. If I went down a block, I was the handsomest kid on the second block … and the third and the fourth. And that gave me an opportunity to step out. There were a lot of negative things about it, a lot of problem things about it, in poor neighborhoods where nobody had a nickel. I had a family that offered me money to [pretend to be] their son so they could impress some people. For a poor kid, I was very gifted. I was given a lot of gifts.

When you first signed a contract with Universal Pictures, how did that work? Did they tell you they needed you today on stage seven on the barroom set or to go grab a tuxedo, today you had to be in the crowd. Is that what you did?

Yeah, that’s what I did. I danced at the Monte Carlo in one film; in another I was a drug salesmen. I had a lot of little roles. I enjoyed those pictures. I didn’t have that much to do, and I had a chance to watch and see how pictures were made. How you got to your line, how you had to stop, how you had to turn. All of those physical things. Those were the things that helped you.

Even the B-pictures they used to make are better than most of the films being made today.

I think so. I don’t think I’ve seen a movie like Spartacus or Some Like it Hot. [Someday] they are going to make a picture with a lot of emotional attachments.

You were really a part of that last group of studio-groomed movie stars. It wasn’t the same with the people who came after you.

When you were making a movie like Some Like It Hot, did you know instinctively that it was going to be a great movie? 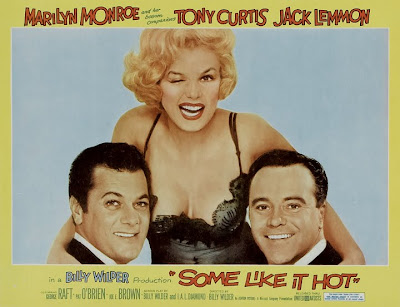 No, there was no way I could know that. I knew there was some ground breaking [aspects]. Guys dressed up like girls, but that had been done before. There were a lot of little things that hadn’t been done – the idea that they had to escape the [St.] Valentine’s [Day] Massacre. Little sections of life. That’s what made it so appealing.

One of the things that struck me in your autobiography, American Prince, was the impact, beyond acting, that you had on popular culture. Elvis copied your hair.

Thank you for saying that. What I brought to films was a sense of not caring, a sense of naturalness. There was nothing artificial. Some actors in the method studio – Marlon Brando – took what were natural gifts and embellished them. So I came along and just didn’t do that. That gave every kid on the block the feeling that they could [act].

You influenced a number of generations. The Beatles put you on the cover of Sgt. Pepper’s Lonely Hearts Club Band.

I’m not looking for adulation or for someone to blow smoke in my ear and tell me how great I am. I know who I am and what I am. I know my weaknesses and my strengths. I’m so pleased I was able to pass this on to other people. If they had a gift of some kind, they were able to embellish it, make it part of their lives. If they could do that, they would be happy.

Do you have one movie of yours you like more than others?

The Great Race (1965). I loved that. I played honor and goodness and [Jack Lemmon] played the devil. It was the most amusing movie. I liked Sweet Smell of Success, too. Burt Lancaster was the finest actor, the most genuine man I ever knew.

Yes. I had an inclination for it. As I kid, I would climb up the chain links that led to the El in New York City and hitch on the back of cabs and cars and trolley cars. You see I was doing that already to prepare myself for the movies. It was hard, but I was a good athlete. I never did anything that I felt was beyond what I could do.

A lot of Trapeze is nerve-wracking because you can see it’s really you and Burt Lancaster doing the high-wire work.

Yes. Well, I did that. They showed me what to do if you fell. There was a big net underneath. I trained for about six months. I became part of the circus and it worked. I’ve had a good life. A really good life. ––Originally published in the October 2009 issue of Sedona Monthly
Posted by Arizona's Little Hollywood at 12:16 PM