Cisco? Is that you?

Hollywood may have turned O. Henry’s Cisco Kid into “The Robin Hood of the Old West,” but that’s not quite what the writer had in mind. Here’s how he described the ­character at the start of his short story, “The Caballero’s Way”:

“The Cisco Kid had killed six men in more or less fair scrimmages, had murdered twice as many (mostly Mexicans), and had winged a larger number whom he modestly forebore to count."

Poor Cisco. Not only did Hollywood whitewash his macho personality, but a few amateur historians have mixed up the locations where his sanitized adventures were put on film. Curiously, a few sources on the Internet and elsewhere have listed 1939’s The Cisco Kid and the Lady as a Sedona production, but it’s not. For starters, if any Sedona scenes were shot they didn’t make it into the final cut; it’s highly unlikely a crew would have gone there in those days, shot footage, and not used any of it. But beyond that, a search for any records of a crew coming to Sedona for Cisco Kid and the Lady in 1939 came up empty. 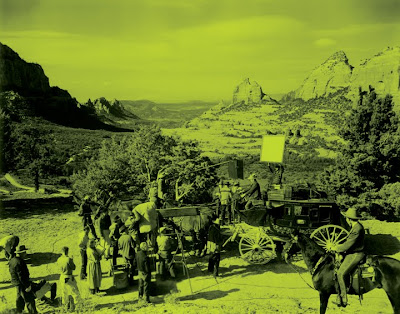 Before the shooting starts: Setting up a Viva Cisco Kid scene on Sedona's Schnebly Hill.

By all reliable accounts, Cisco Kid and the Lady was filmed in the Alabama Hills near Lone Pine, California. Those who say Cisco Kid and the Lady was shot in Sedona almost certainly have it mixed up with Viva Cisco Kid, which is clearly a Sedona production, a fact easily proven by viewing the film and confirmed by the extensive local newspaper coverage of the crew’s 1940 visit to town – and if you still need further evidence, just look at the ­photo above.––Joe McNeill
Posted by Arizona's Little Hollywood at 6:13 PM