If you’re under age 70, you may think “Tom Mix” is a frozen daiquiri flavoring product, but the name actually refers to Holly­wood’s onetime top movie cowboy, who appeared in close to 300 mostly silent pictures between 1909 and 1935. By the end, Mix’s career was on the skids––he was, after all, 60 years old and a little trailworn–– and he met his maker before he ever had a chance to stage the comeback that might have finally landed him in front of a camera in Sedona.

Mix entered Stiff City in Arizona, but it wasn’t a desperado or even a fiery studio mogul that did him in. He died instantly on October 12, 1940, after plunging his open 1937 Cord Phaeton convertible into a dry wash on a lonely highway near Tucson and getting brained by his flying luggage. Remarkably, it was said that despite his violent end, Mix’s body was unmarked and his white cowboy suit unwrinkled. He would have liked that. 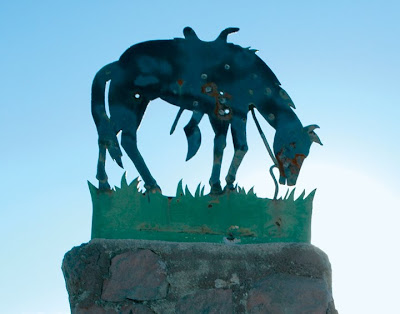 The spot of Mix’s demise is marked with a stone monument, topped by a two-foot-tall metal cutout of a forlorn, riderless Tony, Mix’s movie horse, dedicated by singing cowboy Gene Autry in 1947. While lacking in the majesty of, say, the Washington or Lincoln Memorials, it at least take precedence as a curiosity. Today, the Tom Mix death site is part of a highway rest area; the horse cutout was unceremoniously shot full of holes at the time of my visit. The Tom Mix Memorial is located on AZ-89, 17 miles south of Florence between mile markers 115 and 116; keep an eye open for the sign; if you blink, you’ll miss it.––Joe McNeill
Posted by Arizona's Little Hollywood at 8:43 AM