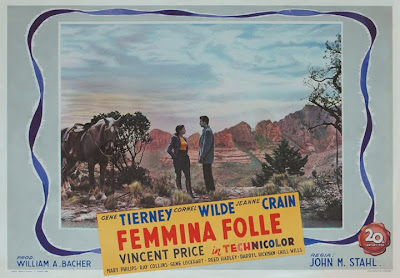 Obsessiveness, madness, and an immoral female hellbent on destruction were the signature themes of film noir, and in 1945’s Leave Her To Heaven (“the first psychological drama to be shot in color”), Gene Tierney, the woman Darryl F. Zanuck once called the most beautiful in movie history, earned her only Best Actress Oscar nomination for portraying a sociopath with a deep-rooted Oedipal complex. After World War II, American films made during the conflict received belated distribution in Europe, and Leave Her To Heaven finally reached overseas screens in 1948. This Italian photo­busta boasts a stunning view from Sedona’s Schnebly Hill; the title literally translated means “Crazy Female.”