Champion of the West

91 year-old dance legend Marge Champion will join Turner Classic Movies host Robert Osborne in Sedona to present George Sidney’s Show Boat on September 7 as part of the Sedona International Film Festival’s Living Legends series. Ms. Champion, an acclaimed choreographer, director, teacher and actress, is perhaps best known for working as a dancing team with her former husband, Gower Champion, and the duo will be seen tripping the light fantastic in the 1951 MGM adaption of Jerome Kern’s classic musical play showing in Sedona. My colleague, Erika Ayn Finch, had the chance to interview Ms. Champion before her visit and they discussed, among other things, her early film work for Walt Disney Studios as live action model for the title character in Snow White and the Seven Dwarfs (1937), the Blue Fairy in Pinocchio (1940) and the ballet dancing hippopotamus in Fantasia (1942). You can read the interview in the September issue of Sedona Monthly, on sale at Barnes and Noble, Borders Books, and independent booksellers across the country.

I couldn’t resist asking Erika to include a few questions for Ms. Champion about the most obscure job of her distinguished career, playing the heroine in Honor of the West, a 1939 B-Western starring forgotten singing cowboy Bob Baker. Billed as Marjorie Bell (she was born Marjorie Celeste Belcher), the seventeen year-old Champion had her first credited movie role in the picture, which was filmed on location in Kernville, California, about three hours north of Los Angeles.

Her ridin’, ropin’, vocalizin’ leading man, Bob Baker, had been a singer on WLS’ Chicago-based National Barn Dance radio show in 1935 (billed as “Tumble” Weed; his real name was Stanley Leland Weed) and was a longtime resident of northern Arizona. He’d been employed in the license division of the Arizona State Highway Department and worked for “Shirley’s Cowboy Guides and Entertainers” at the Grand Canyon prior to going to Hollywood in 1937.

Baker starred in twelve B Westerns for Universal Pictures (and was demoted to Johnny Mack Brown’s second banana for a final six); after playing a few small roles for Monogram and United Artists he quit the movies in 1944 and returned to Flagstaff to work as a police officer. Baker died in 1975 and is buried in Clear Creek Cemetery in Camp Verde, Arizona, about 40 miles from Sedona.––Joe McNeill

ERIKA AYN FINCH: How were you cast in Honor of the West?

MARGE CHAMPION: I had just graduated from Hollywood High School and had a great friend, one of [character actor] Fred Stone’s daughters, and they had a friend named Henry Willson, who was an agent. He took me on because he said I was right for certain kinds of movies. He sent me out to Universal to audition for Honor of the West. And I was terrible. I was 17 and had no acting experience except through pantomime and dancing. Its a hilarious movie but not because it’s any good (laughing).

Oh, yes! They’ve shown it at Film Forum [a repertory movie house in New York City] and a few other places and I’m always embarrassed. They invite me to come and talk about it.

Why didn’t you make another Western?

Because I was not exactly trained in horsemanship (laughing). I went over to Griffith Park and took six horseback riding lessons when I knew I had the part. 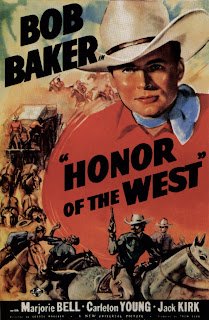 In the movie I had to lead the posse to rescue the hero, which was kind of a twist, but I was nearly brushed off the horse on the very first day of shooting. They gave me the fastest horse and it was sheer terror. If not for one of the extremely talented cowboys who saw what was going to happen I wouldn’t be here to tell the tale. That was the only time a second shot was taken by the director [George Waggner] because they never took more than one.

In the film Bob Baker never takes his hat off, the reason being that he didn’t have any hair. I had only seen him on the set with his hat on and when I met him in the evening (everybody had supper together) he had his hat off and I didn’t know who he was!

Do you have any other memories of Bob Baker?

No, I never saw him again. He did quite a few of those one week [Westerns] and he would have a different leading lady every week.

He made three pictures in three weeks and it took seven days to make that picture. The scripts were done just about as fast as they do a television show now. They were filmed on location with not one indoor shot. And you had to supply your own jeans or whatever costume you had to wear. In those days they didn’t make girls’ jeans so I had to buy boys’ jeans, the kind with the buttons on the wrong side––I still have them, as a matter of fact. You learn some things along the way and one thing I learned is that if you’re not right for Western movies you’d better stick to what you know how to do. Copyright © by Bar 225 Media Ltd.
Posted by Arizona's Little Hollywood at 7:44 PM