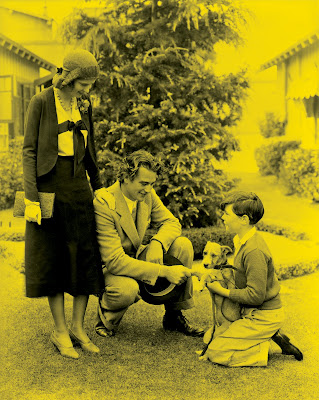 Behind the Scenes Photo Number One: Bright-eyed and bushy-haired Marion Morrison––who was just starting to answer to the name “John Wayne”––gladhands a pooch he and Marguerite Churchill (his first-ever screen leading lady) chanced to encounter while strolling the Fox Movietone lot with a publicity cameraman in 1930. Wayne and Churchill, reportedly an item at the time, were toplining Raoul Walsh’s The Big Trail, which did some location filming at the Grand Canyon. Three years later Churchill married actor George O’Brien, who starred in four Westerns filmed in Sedona.––Joe McNeill
Posted by Arizona's Little Hollywood at 7:48 AM