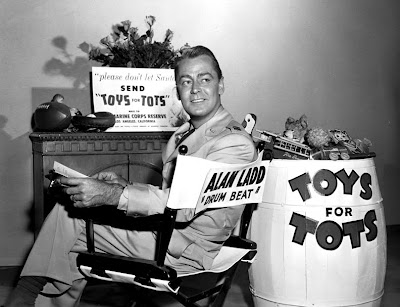 Toys For Tots started in 1947 when Marine reservists collected 5,000 toys for local children from collection bins placed outside of Warner Bros. theaters in Los Angeles. The charity was launched nationwide the following year and founder William L. Hendricks, a Marine Corps Reserve officer, used his position as PR director of Warner to enlist celebrity endorsements. And what better way was there for Hendricks to publicize a WB movie than to combo it with the tug at the heartstrings charity nearest and dearest to his heart? So Alan Ladd, producer/star of Drum Beat (filmed in Sedona in 1954) lent his name––and the title of his new film–– to the joint cause of happy kids and healthy box office. 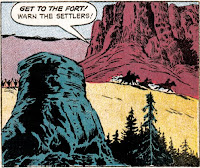 Warner Bros. pulled out all the stops to promote Drum Beat, even beating the drums for a tie-in Dell comic book featuring Ladd and co-star Charles Bronson on the cover. Warner promo materials promised “Books nationally distributed simultaneously with film’s release” for a “[t]ie-in with newsstands, drug and stationery stores, railroad and air terminals, wherever books are sold.” The comic book may not have had the most accurate drawings of Sedona’s landscape, but it was a rare chance to see them in full-color benday glory. 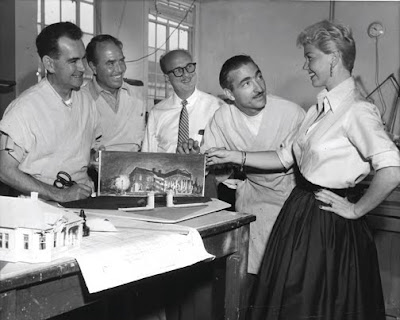 The Hoopla flew thick and fast for Drum Beat. Warner Bros. even drafted into service one of its biggest stars, Doris Day, fresh from starring in Lucky Me (the first musical released in the CinemaScope format and a film she reportedly cared little for), and soon to co-star with Frank Sinatra in Young at Heart (which after completing she chose not to renew her WB contract), who is pictured visiting the studio art department. Good soldier Day is being shown a painting of the White House as it would look in Drum Beat, a film she had absolutely nothing to do with. Que será, será to ballyhoo a picture!––Joe McNeill

Drum Beat airs twice this month on Encore Westerns; August 5 at 5:05 p.m. and August 19 at 1:40 p.m. Both scheduled screenings are Eastern Time.
Posted by Arizona's Little Hollywood at 8:50 AM