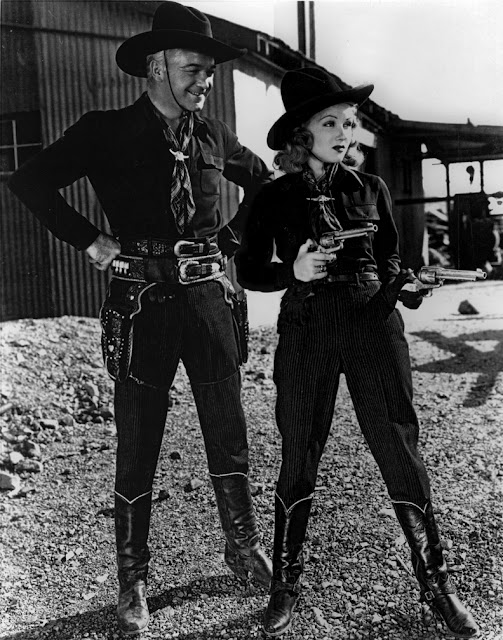 Grace Bradley Boyd stepped off a train in Flagstaff on July 15, 1937, having just barely missed out on a rare treat  in those days – a Sedona honeymoon. Greeting her at the station was her husband of five weeks, actor William Boyd – better known to a legion of young fans as cowboy hero Hopalong Cassidy – who had just spent six days filming scenes for his 14th Hoppy picture, Texas Trail, at Foxboro Ranches, which sat on a rim above Sedona’s Schnebly Hill.

Mrs. Boyd was sparkling and mischievous during a memorable 2005 phone interview about Texas Trail that turned into a three-hour chat covering, among other things, Brooklyn, kids, home invasions, and the benefits of a Tai Chi workout. She died at age 97 on September 21, 2010. Here’s a sampling of some of the many things Grace Bradley Boyd told me that afternoon.––Joe McNeill

"Bill had a career of marrying his leading ladies; I was number 5. He said to me, 'Why didn’t you grow up a little faster, it would have saved me an awful lot of trouble!' And I said, 'Well, I grew up as fast as I could!'

"I fell in love with him when I was 12 years old and saw him in The Volga Boatman. We only knew each other three weeks when we married. We met and he proposed on the third night. But we had to wait three weeks because he was that far away from getting a divorce. In those days, it was a year. It turned out we were married on his birthday, June 5th 1937; he was on a picture, Hopalong Rides Again. And when it came out in the papers that we were married, they headlined the story with the title of the picture, Hopalong Rides Again. Everybody said, 'Oh my God!' because they didn’t even know we knew each other.

"People said it wouldn’t last six months, but of course, it turned out to be just perfect. We were married 35 years and were only separated two nights, and both times he had very serious accidents. So he said, 'OK, that’s it. I’m not going to go for that third time!' So I stayed real close.

"Judith Allen [Texas Trail's leading lady] was at Paramount when I was, but I didn’t know her too well. When I first came out to California from New York in ‘33, they picked me up in Pasadena and took me right to the studio and ushered me into Cecil B. DeMille’s office; DeMille was casting for this picture he was going to do about a young girl coming into womanhood (This Day and Age, 1933). So he was insisting upon hiring a virgin. Well, I had come out with my teddy bear and my mother!

"He sat me down and looked at me and said, 'No. You don’t look like a virgin. I see you on a couch with a tiger skin and two Nubian slaves, one on each side, both with a big fan.' I said, 'Oh, sure!' I did not get that part, but DeMille did pick Judith to be the virgin. Then it came out, maybe a few weeks later, that she was married to the top professional wrestler at the time!”
Posted by Arizona's Little Hollywood at 7:20 PM