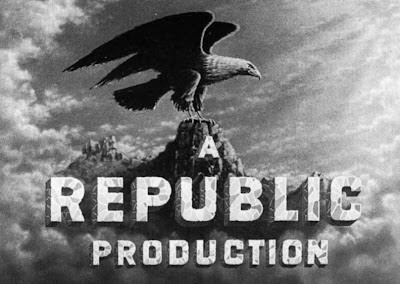 Forget MGM – how many tapdancers have you noticed bucking and winging across the screens of your local multiplex lately? The Golden Age movie studio that has really had the biggest influence on modern-day Hollywood is Republic Pictures, the legendary B-picture factory once located in the Studio City district of Los Angeles’ San Fernando Valley. Republic specialized in pop escapism decades before the phrase “summer blockbuster” was invented, mass-producing a steady stream of serials, Westerns, action adventures, sci-fi flicks, mysteries, melodramas and yes, even musicals, between the mid-1930s and the late-1950s. In that dinosaur era before computers and green screens, Republic’s films boasted the best special effects in the business; and in 1941 the studio even made the first live-action movie based on a comic book superhero, The Adventures of Captain Marvel. But it wasn’t all explosions, masked heroes and cliffhangers. Republic had more sedate moments, too, releasing critical darlings like Orson Welles’ Macbeth (1948) and John Ford’s The Quiet Man (1952).

The “Thrill Factory” has faded into history, but on Sept. 25 movie fans will have the rare opportunity to walk where cowboys Gene Autry and Roy Rogers rode when the Cultural Affairs Committee of the Studio City Neighborhood Council and Museum of the San Fernando Valley salute the 75th anniversary of Republic Pictures with a celebration on its former lot, now CBS Studio Center.

The 40-acre Republic/CBS Studio Center lot has seen its fair share of Hollywood history. Opened in 1928 as Mack Sennett Studios, it was built by the King of Comedy as an assembly line to churn out two-reel slapstick shorts. Sennett went bankrupt five years later, and the property became an independent production facility for low-budget filmmakers. Mascot Pictures, which specialized in Saturday matinee serials like The Phantom Empire (1935), took over most of the space and the lot became known as Mascot Studios.

In 1935, Mascot merged with three other Poverty Row companies along with film-processing laboratory Consolidated Film Industries to form Republic Pictures. Over the next 25 years, 1,081 features, serials, animated cartoons, short subjects and training films were produced on studio grounds, some even starring A-listers like Errol Flynn, Barbara Stanwyck, Myrna Loy and Robert Mitchum. 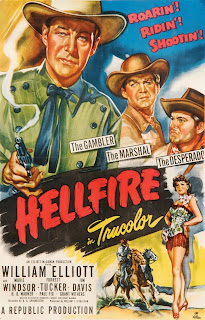 Sedona and Republic are historically joined at the hip. In 1946, the studio built a Western street set for John Wayne’s Angel and the Badman near Coffee Pot Rock that was left standing at the end of filming and became a major enticement for other companies to shoot their movies there. The Fabulous Texan, a Republic A-Western starring B-cowboy William Elliott, was partially photographed around the area in 1947 and was soon followed by a pair of experimental two-day location shoots Republic saw as a way to keep production values high and costs low for its mid-budget Western opuses, Hellfire and Singing Guns.

Without question, the greatest collaboration between Republic and Sedona was Johnny Guitar, Nicholas Ray’s over-the-top 1954 Truecolor Western starring adversaries Joan Crawford and Mercedes McCambridge. The film, a critical dud when originally released, is now considered a masterpiece and listed on the Library of Congress’ National Film Registry as an American cultural treasure.

Despite its later acclaim, by 1963 Republic was under siege. CBS leased the studio lot from the ailing company, which by then was reduced to surviving by renting its old film library to TV stations, and the lot was formally renamed CBS Studio Center. (The network bought the property in 1967.) Today, CBS Studio Center is one of the busiest sitcom production facilities in Los Angeles.

CBS Studio Center is one of the few lots in Hollywood that doesn’t offer tours, and it isn’t open to the public. So don’t miss this rare opportunity to celebrate the late, great Republic Pictures on its home turf. Who knows? You might have to hang on for 75 years to get another chance – and time is the only cliffhanger with no chance of an escape.