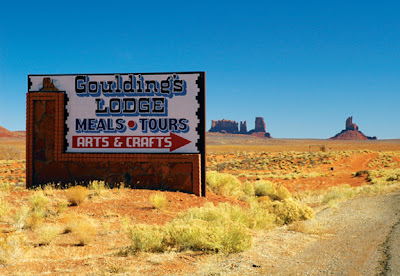 Monument Valley and Sedona share a unique distinction – thanks to the movies, both symbolize “the West” in the American subconscious and to the world at large. But unlike Sedona, Monu­ment Valley was never anonymous. Thanks to its link with director John Ford from 1938 on, there was always a name attached to its iconic buttes. Another difference: If Ford were here today, he’d have no problem recognizing “his” Monu­ment Valley.

Every time the door swings open at Goulding’s Trading Post – man’s tiny contribution to the topography of Monument Valley near the Arizona-Utah border – a cowbell clangs loud enough to make any moo-ver shaky. But, the arrival of any person around here, historically, probably would be an event requiring fanfare – Goulding’s is in what most people would consider the middle of nowhere, except for one thing: Its front step looks out on a view anyone who’s ever seen a Western movie would recognize in a heartbeat.

Such was the power of Monument Valley as defined through the lens of John Ford and his team that for decades, reviewers who saw an unidentified Sedona on screen reflexively assumed our red rocks must be Monument Valley. But one look around at the actual location is all you’d need to see to never make that mistake again. Perhaps the most famous of the buttes – the East and West Mittens, and the Sisters – are set in relief against a vast backdrop of...nothing. Their power, inseparable from the way Ford showed them in the many movies he made here, starting with Stagecoach in 1938 and ending with Cheyenne Autumn in 1964, is timeless. 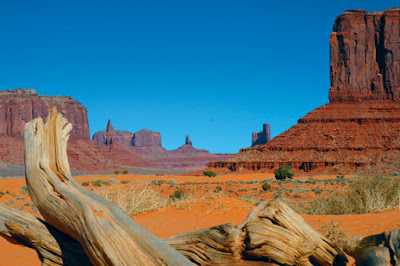 Monument Valley today is a Navajo Tribal Park. Guided tours are available, which allow access to areas and views closed off to drivers in their own vehicles who choose the self-guided tour along a 17-mile unpaved loop road. Horseback rides are available to fulfill any John Wayne fantasies.

Apart from the Navajo-owned View Hotel, which opened in December 2008 adjacent to the Tribal Visitors Center, there is Goulding’s. Opened as a trading post by Harry Goulding and his wife, known by her nickname “Mike,” in 1928, it is now a museum. Behind it stands a tiny cabin seen as John Wayne’s cavalry headquarters in Ford’s She Wore a Yellow Ribbon (1949) – “Mike” Goulding used it to store her potatoes – and next door is Goulding’s Lodge, for those who plan to stay.

Ford and his crews were frequent guests, and letters of Thanks from the director, John Wayne (“Harry, you and I both owe these monuments a lot, Duke”), Henry Fonda, and others are framed in the front room of the trading post/museum. You’ll pass through the Ware Room (used to store dry goods, now filled with vintage blankets, riding boots, rugs, and photos), the “Movie Days Film Gallery” (film memorabilia), and the upstairs living quarters, preserved as it was in the Goulding’s day – save for the air conditioner now in the window that frames the classic cinematic view. We trust Harry and “Mike” would concede this one nod to “progress” – at least in the summer. –– Steven Korn. Originally published in the May 2006 issue of Sedona Monthly
Posted by Arizona's Little Hollywood at 8:39 AM