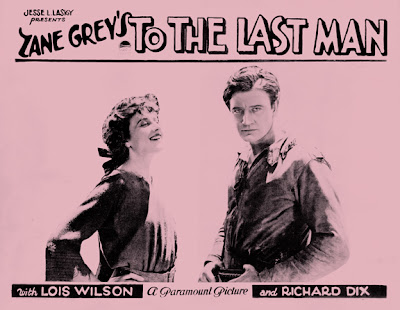 To the Last Man began approximately four weeks of location filming in spring 1923. The company of 49 film workers and 53 pack animals arrived at the Tonto Basin location after traveling 60 miles by car from Phoenix, where the nearest railroad station was, and then riding more than 30 miles of steep rock-strewn trails on horseback into the rugged Mogollon Rim country. Luggage, props, costumes, living necessities and filming equipment were carried to the location by mules; it took five of them just to tote the more than 10,000 rounds of ammunition said to be used in making the picture.

Filming began in the canyon east of Zane Grey’s lodge, and for two weeks the company climbed each morning to locations as high as 2,500 feet above base camp. A number of other important scenes were photographed at Sheep Basin Mountain, a deeply isolated spot in the wilderness about 60 miles east of Payson near the town of Young; previously known as Pleasant Valley, Young had been the actual site of the Graham-Tewksbury feud. Lois Wilson may have received a firsthand sense of the area’s isolation when she was reported by the Seattle Times to be the first woman Mrs. James Benson, a local rancher’s wife, had seen in two years. When introduced, Wilson was wearing her costume of rough homespun, and the rancher’s wife assumed these were her everyday clothes.–––Joe McNeill © 2011 Bar 225 Media Ltd.
Posted by Arizona's Little Hollywood at 7:36 AM