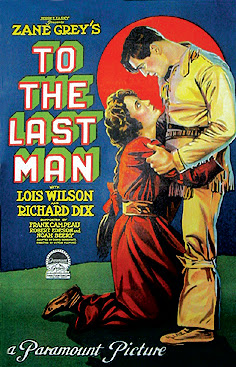 In 1921, Zane Grey bought three acres of land on Anderson Lee “Babe” Haught’s homestead in Arizona’s Tonto Basin to build a hunting cabin. “This is where I want my lodge so I can see as far as the eye can see,” Grey wrote. “Beautiful country! And this is where I am going to write a lot of my books.” Haught, who’d worked as Grey’s wilderness guide on the Mogollon Rim since 1918, built the lodge on the designated spot, which lies today within the gated Zane Grey Ranch subdivision in Payson; Grey’s cabin burned to the ground in 1990, but a replica was reconstructed in Payson’s Green Valley Park 15 years later.

The Los Angeles Times reported on April 16, 1923, that Victor Fleming and Famous Players-Lasky production executive Lucien Hubbard (who would oversee most of the company’s silent Zane Grey productions and be credited for writing the scenarios of seven of them) left Hollywood for Tonto Basin to scout filming locations for To the Last Man. At the same time, Grey wrote to Babe Haught, telling him he’d leased his cabin to the film company and requesting that he give the crew a hand with the production. Haught would service Last Man filmmakers by supplying local laborers, extras, horses and location expertise in the same way that Flagstaff rancher Lee Doyle, Grey’s trusted wilderness guide in northern Arizona, would for The Call of the Canyon, The Vanishing American and the dozens of films made in Sedona into the late 1950s. 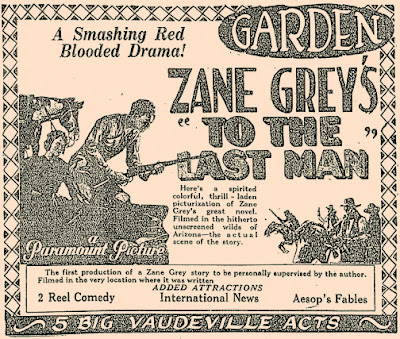 Haught and his men went to work right away, building a camp of tent houses to lodge the film company and a log cabin that would be used for a few scenes in the picture. An exact reproduction of a pioneer settlement was also built “down below Payson” by Famous Players-Lasky carpenters assisted by a group of local axmen who hewed logs. The lower stories of the 12 buildings were built of stone; logs and rough hewn boards and shingles were used to complete the structures.

Last Man would be hyped by the studio with claims that some of the Tonto Basin residents hired as extras were descendants of the Pleasant Valley War’s “real last man” and that these mountaineers actually looked their parts before cameras started cranking. Arriving on location with period clothing to dress up the locals as 1880s pioneers, studio costumers were dismayed to discover that the everyday clothes worn by some of the extras looked more authentic than the actors’ costumes, claiming “from high-heeled riding boots, to sombreros, each man looked as if he might have stepped off a Broadway stage where some play of frontier days was being produced.”–––Joe McNeill © 2011 Bar 225 Media Ltd.
Posted by Arizona's Little Hollywood at 8:23 AM