To the Last Man’s top-billed Lois Wilson would also play the lead female roles in The Call of the Canyon and The Vanishing American. She became a major star in the late silent period; some of her other significant roles were in Monsieur Beaucaire (1924) opposite Rudolph Valentino, and as Daisy Buchanan in the first film version of F. Scott Fitzgerald’s The Great Gatsby (1926). Besides starring in To the Last Man and The Call of the Canyon, Richard Dix had major roles in six other films released during 1923 and would star in The Vanishing American two years later. Before filming began on Last Man, Zane Grey took his children to see a film in which Dix appeared and he later wrote to his wife, “we went to the movies last night, and took the kids. Luckily the show was decent. We saw Richard Dix (the man who’s playing Jean Isbel in my forest story) and I must say that I like him very much.”
During Last Man filming, gossip columnists began to link Dix and Wilson romantically and for a few months they apparently did have an off-screen relationship. “Why didn’t I marry him in real life?” a pensive Lois Wilson reflected to author John Tuska for his 1976 book The Filming of the West. “Maybe, ultimately, because I was so very close to my family. But I didn’t think so at the time. I remember while we were shooting To the Last Man, Vic Fleming wanted to go to the Grand Canyon for some scenic locations. We were camped on the floor and had to ride these small but wiry little mountain ponies up a steep path carved out of the side of the canyon wall. There was scarcely enough room for one horse; one slip, and rider and horse would plunge over the side.
“Well, I was a good rider. I went up that narrow trail with the others and enjoyed it. After a couple of days, I figured, I could do it without holding my breath. Dick didn’t want me to make the ride. But I went anyway. Then, when we got to the top, he came over to where I was sitting on my horse and he asked me if I had been afraid.
“‘Not at all,’ I told him bravely.
“‘I don’t think I could love a woman who wasn’t afraid of a thing like that ride,’ he said.
“‘You can’t love me,’ I returned, ‘because I wasn’t afraid.’
“By the time we made our next picture, he was right; the romance had cooled.”
Half a century later, catty silent movie queen Leatrice Joy bared her claws when she suggested a less sentimental reason for the demise of her old friend’s affair with Dix. “I think it was the drinking that ruined them,” she gossiped to Talking to the Piano Player author Stuart Oderman in 1970. “They were never drunk at the same time. In Hollywood, everything is timing.” 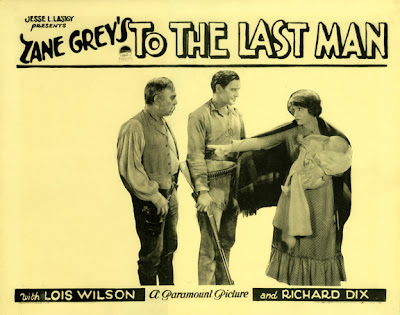 Supporting actors Noah Beery, Fred Huntley and Leonard Clapham would appear in To the Last Man and The Call of the Canyon, and both films would have at least two crew members in common. Cameraman James Wong Howe, billed as James Howe, was a pioneer, a Chinese-American working on major Hollywood productions. He would go on to earn 10 career Oscar nominations, winning twice. Although some modern sources name Bert Baldridge as Last Man’s co-cameraman, contemporary crew lists don’t mention him, so it’s more likely that he worked as Howe’s assistant.
Scenario writer Doris Schroeder was assigned to adapt Last Man for the screen, and curiously, a studio-generated news item seems to badmouth Grey’s writing ability to build up hers, insisting that not only did she incorporate the major elements of his story “but also, where good judgement decreed, inserted certain scenes or revised others as her experience as an adaptor dictated.” Schroeder would be credited (with Edfrid A. Bingham) as co-writer of the movie version of The Call of the Canyon.–––Joe McNeill © 2011 Bar 225 Media Ltd.
Posted by Arizona's Little Hollywood at 8:09 AM