Kayenta, Ariz., P.O. [was] Beside Itself With Arrival of Players 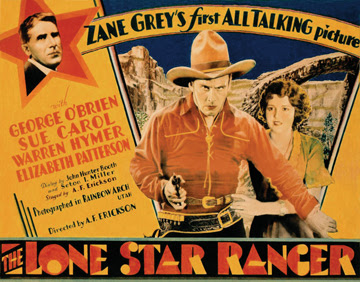 Movies weren’t the only fantasies churned out by Hollywood dream factories. Here’s a PR story issued by Fox Film (with factual annotations added) for 1930’s The Lone Star Ranger, the first sound film photographed on location in northern Arizona. A sequel released later that same year, The Last of the Duanes, would be the first talkie made in Sedona.––Joe McNeill

The most remote post office in the United States was discovered by George O’Brien and other members of the company making The Lone Star Ranger, Fox Movietone's all-talking romance of the southwest.

The post office is located in Kayenta, 175 miles from the nearest railroad station [and 26 miles from Monument Valley, where some scenes were filmed]. The postmaster is an old miner and the post office comprises four compartments in an old soap box. [The Kayenta postmaster was actually southwest explorer John Wetherill, who led the first party of white men to Rainbow Bridge in 1909 and served as first custodian of the Navajo National Monument from 1909 to 1938. He was also partner in the Wetherill and Colville Trading Post and Lodge, where the Lone Star Ranger company bunked during location filming.] While the Fox Movietone company was in that vicinity, the postmaster did a flourishing business in outgoing mail and he was one proud individual. 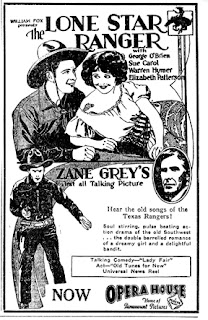 [Co-starring actress] Sue Carol was the only member of the company who received mail. She had two letters –– from Nick Stuart [the actor/ orchestra leader she was married to at the time; Carol would marry third husband Alan Ladd in 1942].

Another interesting discovery was made at Rainbow Arch [now known as Rainbow Bridge, it is located near Page, Ariz., in the Glen Canyon National Recreation Area]. This was a large register, encased in a metal box, set in a huge rock. The book was placed there by the Federal Government and nearby is a printed request for every visitor to register. As the Fox company numbered some 200 people, [reports published in Flagstaff’s Coconino Sun newspaper put the number at 75] they came close to filling the book.

It is interesting to record that the last visitor to register before George O’Brien and Sue Carol inscribed their names was Zane Grey [author of The Lone Star Ranger] and the one just ahead of his was Harold Bell Wright [a novelist best known for The Shepherd of the Hills; O’Brien would star in a film adaption of another of his books, When a Man’s a Man, in 1935].

They had visited the same spot some weeks before, both accompanied by several fellow travelers. Grey’s number on the register was 1175.
Posted by Arizona's Little Hollywood at 9:13 AM