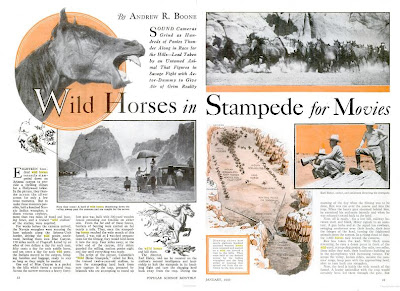 Stampeding hundreds of wild horses for a movie is a piece of cake, right? Spook them with the sound of a sharp bang and away they go. But how do you stop the rampage once it has started? For an answer, check out this fascinating article from the January 1933 issue of Popular Science magazine that reveals the amazing amount of intricate planning it took to run a herd through northern Arizona’s remote Blue Canyon for King of Wild Horses, a long-forgotten outdoor adventure filmed by Columbia Pictures as Wild Horse Stampede.

Blue Canyon, located on what is today the Hopi reservation, was no stranger to the rumble of thundering hooves. Paramount staged a cattle stampede there for the Zane Grey silent Sunset Pass, which was released in 1929 and starred granite-jawed Jack Holt. Later on, rampaging horses raised the dust of Blue Canyon for Universal's  Stormy (1935) and Hoppy’s Texas Trail (1937).

Popular Science put the number of horses running amuck in King of the Wild Horses at 1800, but a Flagstaff newspaper report claimed it was a slightly more manageable stampede of just 700 broncos. Hyperbole aside (the higher number probably originated with an overzealous Columbia PR flack), the article will be of interest to anyone curious about what goes on behind the scenes of movies. You can read it in its entirety at Popular Science’s Website:

By the way, despite the unsubstantiated claims of a few amateur “movie historians” (and IMDB), there is no evidence to prove that any King of Wild Horses filming took place in the Sedona area.
Posted by Arizona's Little Hollywood at 10:49 AM