Gloria Henry: Catching Up with a Strawberry Gal 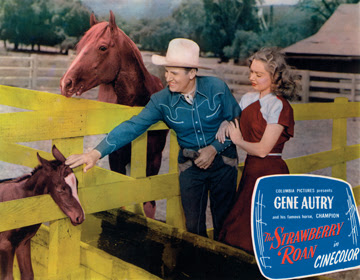 Gloria Henry spent a week in Sedona filming 1948's The Strawberry Roan with singing cowboy Gene Autry. Henry, familiar to baby boomers as mom Alice Mitchell on TV’s Dennis The Menace, was asked in 2005 to share a few of her Roan memories.––Joe McNeill


Did you ever get to ride Gene Autry’s horse, Champion?

Oh, good God, no! Champ absolutely hated me; I think Champ was jealous of any of Gene Autry’s leading ladies unless they really loved horses and I was afraid of horses. I remember we were shooting some beautiful scenery up on top of a hill, on a beautiful day. We were sort of right on the edge of the hill and the cameraman went down on a little hognose area below us, looking up at us and taking these romantic shots. Gene was on one side of Champ, and I’m on the other side and we’re all facing out. Champ looked at me; I could see that his eyes looked funny. He put his head over toward Gene and suddenly he turned it toward me and wonked me as hard as he could with his head, which nearly knocked me over the side. I wouldn’t have died or anything. Another time he looked at me and took his hoof and stepped right on my foot as hard as he could. Luckily, I was wearing good stiff boots. He did his best to get me out of the picture, that’s all I remember.

What was it like being the only woman in the cast of The Strawberry Roan?

Well, you’re not the only woman on the set; there are makeup people, wardrobe people, and the script girl – in those days, it was usually always the script girl – so there were always other women around. But I don’t think it was anything special one way or the other to be the only actress on the set. I mean, it would be different had it been George Clooney (laughing). Then it would have been divine to be the only girl on the set!
Posted by Arizona's Little Hollywood at 8:52 AM