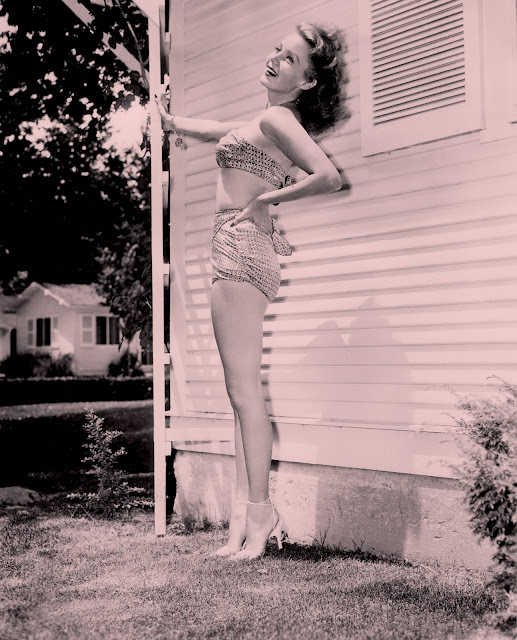 Rhonda Fleming starred in two westerns filmed in Sedona – The Eagle and the Hawk (1950) and The Redhead and the Cowboy (1951). In part two of our edited 2007 chat, the 1950s’ movie queen recalls working with John Payne, Glenn Ford and Ronald Reagan, her problem with horses, and the charitable causes she’s made her focus in recent years. For more on Rhonda's life and work, visit her Website at www.rhondafleming.com.––Joe McNeill

JM: You made quite a few pictures with [Eagle and the Hawk costar] John Payne.

RHONDA FLEMING: I did four films with him. I think The Eagle and the Hawk was the first. I did Tennessee’s Partner [1955] with John and Ronnie [Reagan], who was just a wonderful, nice actor when I worked with him. [Fleming and Reagan made four movies together in the 1950s] We had some wonderful love scenes. I had no idea I was kissing the 40th President of the United States!

In looking back, I recognize the peacemaker he was to become. In one of our films together, as we were rehearsing a scene, the director for some reason became very rude to me. Whatever he said upset me terribly – I started to cry and had to go to my dressing room and my makeup was ruined. I’d never had that happen in my life. Pretty soon, Ronnie came around and said “Rhonda, just put yourself together – I’ve taken care of it and he’ll never act like that again.” He did it in such a quiet, nice way. I returned to the set and [the director] never behaved like that to me again.

You were friendly with Glenn Ford, your Redhead and the Cowboy co-star; what was it like to work with him?

Oh, Glenn and I were just wonderful friends. He was great to work with. We remained friends for years, and even now I’m friends with his son, Peter, his wife, and their daughter. Glenn and I had kind of a little crush on each other – he was a darling guy.

You appeared in a number of Westerns: were you experienced on a horse?

No, I wasn’t. My mother got me a beautiful English riding outfit when I was little; she just forgot to give me the training on a horse. We went to the stables down in Malibu with a young boy who wanted to go horseback riding. They saw me in my riding outfit and must have thought I knew what I was doing, so I got a pretty strong horse. We started out and the boy’s horse just took off and ran, and my horse took off after this kid’s horse. I’m hanging on for dear life when all of a sudden the horse veers to the left and begins galloping as fast as he can with my foot stuck in the stirrup and dragging me along. The next thing I know, I’m waking up in someone’s car after having been knocked unconscious. I was petrified, and my clothes were torn and I remember the young boy looking for me and making me get back on the horse to ride back to the stables.

I looked good on a horse [on screen], but the horses knew better. [On a movie set,] you didn’t have time to get to know the horse and the horse didn’t have time to get to know you. You just got on. I remember one time a horse took off with me on him; I was side-saddled, and everybody’s trying to catch me. I stayed on that time, but the horse kept wanting to get rid of me on a tree somewhere. I love horses, they are so beautiful, but I never want to get on one again. 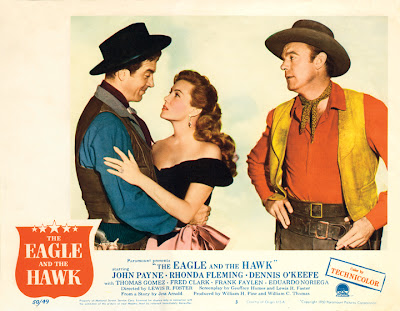 For many years now, you've been focused on charitable work; please tell me a little about the cancer center you founded at UCLA.

Charitable work is where my heart is. My sister and her husband both died of cancer. She lived with me after he passed away. When she was diagnosed, I called [industrialist] Armand Hammer and asked where can I take her to get the help she needs. He lined it all up for me at UCLA. When we got there, I saw such a need there for a place where women and their families could go to find some peace and some help. I started the Rhonda Fleming Clinic for Women’s Comprehensive Care at UCLA, and about a year later we opened the Rhonda Fleming Resource Center for Women with Cancer. Back then, doctors would not give you any hope, they’d say there’s no more that we can do for you, you have to go home and die. I went all over UCLA and said, Don’t you ever say that! You’re never going to say that again! We’re there for them, you send them to us. My sister said to me before she died, “Honey, always make it a place for hope.” Those were her last words to me and that is what we did.
Posted by Arizona's Little Hollywood at 10:13 AM