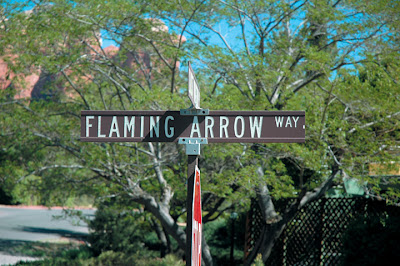 Over the years, the multiple working titles of the obscure 1952 shoot ‘em up Flaming Feather have been a source of confusion to a bunch of well-meaning but misguided Sedona filmographers. At various times during its planning and production, the film ultimately released by Paramount Pictures as Flaming Feather was known as Canyon Diablo, Devil’s Canyon, and Fort Savage. Almost 60 years later, those temporary names still haunt, and distort, Sedona movie history.

A contributor to the Internet Movie Database picked up on a connection between the title Devil’s Canyon and Sedona, but wrongly assumed it meant the 1953 Howard Hughes-produced 3-D Western with that name was filmed here. Not so – it was almost entirely shot on a Hollywood soundstage. Similarly, the Sedona Heritage Museum’s error-riddled filmography wrongly lists the 1947 Red Ryder series “B” western Rustlers of Devil’s Canyon, which was filmed entirely in California, as a local product.

At least two online filmographies compiled by amateur Sedona movie buffs list Fort Savage and Flaming Feather as two different movies made in the area (one also mistakenly lists The Bowie Knife, the working title of 1950’s Comanche Territory, as a separate film). The simple fact is, no Hollywood sound film has ever been released by the name Fort Savage; the closest match is the 1951 Durango Kid “B” western Fort Savage Raiders – which has no Sedona connection.

But the most lasting, glaring misrepresentation of Flaming Feather dates back to its erroneous listing as “Flaming Arrow” in a May 1959 Arizona Highways story about Sedona’s movie history. This mistake was formalized with the naming of the street “Flaming Arrow Way” in the Sedona West subdivision, where roads such as Johnny Guitar St., Pony Soldier Rd., and Last Wagon Dr. honor Westerns made in the vicinity. For the record, no movie filmed in Sedona – or anywhere else in the talkie era – was ever released with the name “Flaming Arrow.”––Joe McNeill
Posted by Arizona's Little Hollywood at 2:28 PM