“I don’t know where I am,” he said with a laugh from his hotel. In 1954, he explains, “there were half a dozen shops and few people. There was a swing over the [creek]. Charlie [Drum Beat costar Bronson] and I swung at the [creek] with some kids. It was great.” 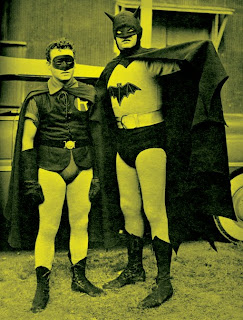 Johnny was born near Kansas City, Mo., in 1923. His farmer dad taught him to dance the “Irish jig” before milking cows as a way to get him up at the crack of dawn. Later, as part of a duo, Duncan and Fisher, he was dancing at Elks Lodges and community events. A talent scout saw the act and invited Johnny to California – his parents got $300 and Johnny signed a contract for $50 per week. He was 15. “I’d gone from plowing a field barefoot to wearing a sport coat in California and I loved it,” he says.

In 1949, Johnny landed the role of Robin in the 15-chapter Columbia Pictures’ serial Batman and Robin, (that’s him with Batman Robert Lowery in the photo). “It was fantastic. Little did I know it would be a classic. Kids today still love Batman and Robin – every 10 years I have a new audience.”

Johnny ultimately moved into the hotel business, though he had bit roles in the 1980s on TV’s Dallas and Dynasty. He retired for good in 2000 and currently lives in Missouri.

One of his favorite movie memories actually involves Drum Beat. In a scene where Indians are chasing star Alan Ladd, Ladd turns and fires at his pursuers. Each time he would fire a single shot, at least three of the riding extras would fall from their horses. The director, Delmer Daves, finally yelled, “cut” and had to explain that only one of them could fall from his horse per shot. “Every time Alan and I saw each other after we made that movie we would laugh and laugh about that,” Johnny says.––By Erika Ayn Finch. Originally published in the January/February 2008 issue of Sedona Monthly
Posted by Arizona's Little Hollywood at 6:42 PM