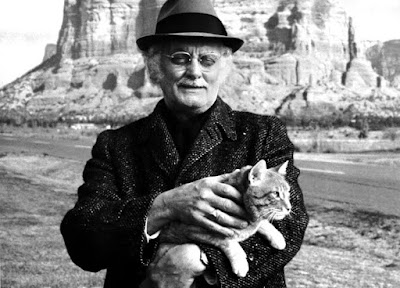 It’s nothing short of amazing, and more than a little disappointing, that so many Sedona film fans have forgotten the still-standing Sedona location of Paul Mazursky’s Harry and Tonto, especially when you consider the 1974 flick is the only movie with scenes filmed in Sedona to have its star win an Academy Award for Best Actor. Art Carney, best known for his role as “subterranean sanitation engineer” (or sewer worker) Ed Norton in The Honeymooners and The Jackie Gleason Show, won the Oscar as well as a Golden Globe in 1975. In the sentimental comedy, Carney plays 72-year-old Harry, who sets out on a cross-country trip with his orange cat, Tonto, after his New York apartment is demolished. After Tonto kicks up a fuss about traveling via airplane and Greyhound Bus, Harry purchases a car (even though his driver’s license expired in 1958) and proceeds to drive to Chicago to see his daughter (played by Ellen Burstyn). When things go sour in the Windy City, he heads west and makes a brief stop in Sedona.

About one hour and 15 minutes into the movie, Harry stands by a telephone booth on SR 179 with Bell Rock and Courthouse Butte looming in the not-too-distant background while his nephew makes a phone call. The telephone booth sits in front of the Sedona Inn, a motel located in the building that now houses Minami restaurant and Indian Ink Tattoo at 6586 SR 179 in the Village of Oak Creek (stop at the commercial center and take a look at it from a different angle – it’s obvious it once housed a motel; it’s even easy to imagine a motel room while dining in Minami). In the six-minute sequence, Harry meets up with a naturopath (obviously there are some aspects of Sedona that haven’t changed in the last 35 years) named Wade (played by Arthur Hunnicutt) who attempts to cure Harry’s bursitis in a motel room. You can see views of Bell Rock from the motel room window; our best guess is the scene was filmed in the room that now houses Minami. When Wade and Harry depart Sedona’s Inn, they drive through the Village of Oak Creek during a blazing sunset. Harry and Tonto have further adventures in Flagstaff, Las Vegas (in a hilarious scene where Harry drags poor Tonto through a busy casino) and, finally, Hollywood and Venice Beach. It’s great to know a piece of Academy Award history and Sedona film history still stands.––Erika Ayn Finch. originally published in the July/August 2009 issue of Sedona Monthly
Posted by Arizona's Little Hollywood at 11:10 AM