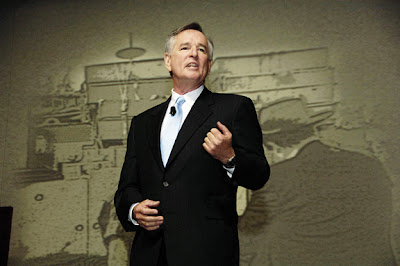 Screenwriter Dan Gordon has written the scripts for some of Hollywood’s most popular films, including Passenger 57, Wyatt Earp, Murder in the First and The Hurricane. He also wrote and directed numerous episodes of the television series Highway to Heaven. But Sedona residents might be more familiar with Dan as the founder of Red Rock Country’s Zaki Gordon Institute for Independent Filmmaking, which is named after Dan’s firstborn son, Zaki, who was killed in a car accident when he was 22. Dan’s life experiences are not unlike those in the character-driven dramas he writes: He had a stint in the Israeli army, lived on a kibbutz, spent a year in New York unknowingly working for the mafia and turned down the opportunity to write the script for Transformers. Dan spoke to us from Los Angeles in an extremely forthright interview. “I’m being more candid with you than most writers would ever be,” he said. Here’s an inside look at what it’s like to write films in Hollywood.––Erika Ayn Finch

DAN: “I was born in a little town called Bell Gardens, California. It was mainly people who came out from the Grapes of Wrath era and stayed. We abounded in churches and bars. We had probably more storefront churches and more honky-tonk bars than anyplace I’ve ever been. It was actually a great place for a writer to grow up because you were around a lot of characters. It was a colorful town. One of my neighbors was Eddie Cochran, who wrote Summertime Blues. I remember my brother and me in his garage listening to him and his pals jam. My friends from my childhood are all still my friends today.

“When I was 16, I more or less ran away from home with my parents’ active encouragement. I went to Israel. I went to a kibbutz and went to high school in a kibbutz. My father was born in 1895 in then czarist Russia. He was 52 when I was born. After his experiences, to expect that he would understand two American teenagers was insane. Everything we did seemed disrespectful to him, and everything he did seemed nuts to us. He and I weren’t getting along, and it was getting physical. I had been raised on Zionist lore, and I had seen Exodus. There was a very fetching young girl who played Paul Newman’s sister. She had these rather fetching kibbutz shorts on, so I decided I’d go and try to find her or her surrogate somewhere in the valley of Jezreel. I fell in love with the lifestyle and people in Israel.

“I came back to the United States to go to college. I went to East Los Angeles College and then UCLA. I worked for a couple of years in the business – I knew I wanted to be a screenwriter/director. I had sold my first screenplay to Universal when I was 20. I sold it as fluke, and I made the princely sum of $1,860. This made me about the richest Jew in LA.

“I worked for a couple of years, and I made one film that, unknown to me, was a money laundering operation for the mob. They were hiring the stupidest kid they could find, and I fit the bill perfectly. They said the budget of the film was $1 million, but they gave me $100,000 assuming I could never make the picture for that. I was closing in on finishing the film, and they told me the film could never be finished because they would be audited. They needed to write off the film as a loss. It was sort of like The Producers. This was 1972, and I was in New York. It was in the middle of the Colombo-Gallo war, and they gave me a bodyguard who was also there to keep me from running because I was getting squirrelly. I lived with these guys in that world for the better part of a year, and I knew I had to get out. I’d been around some very dangerous people and seen some dangerous things. I went back to the kibbutz.

“In 1973, I went into the Israeli army in time to serve in the Yom Kippur War. I was in the army for two years. During that time, on a 48-hour pass, I wrote a screenplay. A friend managed an R&B group and asked me to write a musical for them. Oddly enough, it got financed and that was Train Ride to Hollywood.

“Like everybody of my generation, [the Yom Kippur War] was a traumatic war. So there was a biological response – I assume not unlike what happened after World War II – of everyone who came out of that war wanting to get married and have children. I didn’t know who I was going to marry, but I knew I was going to marry – now. I was discharged in May or June in 1975, and I was married two months later. My oldest boy, Zaki, was born in June 1976. My then wife was an American girl who didn’t take to life on the kibbutz, so we left. We lived outside of Jerusalem, and I worked three jobs. There was no such thing as a screenwriter in Israel. I’d been milking cows on the kibbutz and working in the field. So I taught at a film school and at Tel Aviv University and wrote ad copy for an advertising agency to make ends meet.

“By the time I had two kids, there was no way to make a living at a film studio in Israel. I had a lot of friends tell me if I came back to LA, I could get all the work I wanted. So in 1980, I came back to the United States. That was a heartbreak. I had hoped and planned to live in Israel and put down roots there. I love this country, and I love that country. In short order, I started making a living as a screenwriter. I had a couple of hard years, but then I began selling on an ongoing basis. I had a string of movies that had varying degrees of success, and I went on to work on some very good television series.

“Highway to Heaven was one of my favorites. I’m as proud, if not prouder, of the work I did there as I am of anything else in my career. I had a great time working with Mike Landon. He was another mentor in my life – he and Don Simpson. He was like a big brother to me, and it was great fun to work on that show. I had a degree of freedom that I’ve never had since because Mike was such a big star and powerful force at NBC. I wrote 45 of the first 100 episodes, and I did the rewriting on all the others. Mike would do the final rewrite. It was a great place to learn to be a writer, and he would insist that I direct because he wanted me to learn production. I use what I learned from Mike to this day. – Originally published in the January/February 2011 issue of Sedona Monthly
Posted by Arizona's Little Hollywood at 7:23 AM