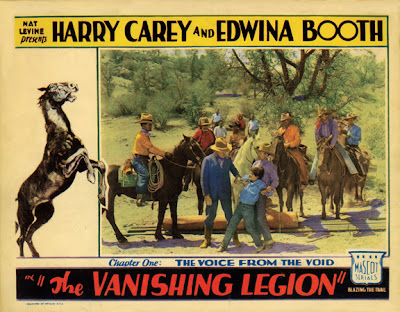 I uncovered a lot of obscure facts while researching my book Arizona’s Little Hollywood, but one of the most unexpected finds was a gushing trade review for The Vanishing Legion, the 1931 Mascot Pictures serial that paired cowboy star Harry Carey with Flagstaff’s own Rex, the King of Wild Horses. So now we have confirmation: The Vanishing Legion is American cinema’s most critically lauded examination of an unseen archvillain’s use of radio to command minions to do his evil bidding.––Joe McNeill

ACE SERIAL
“This is probably the best serial ever turned out by an independent. It has everything that a thrill serial can pack into the footage. Harry Carey and Edwina Booth, with the reps they made in Trader Horn, are a strong combination to exploit. Directed by B. Reaves Eason, who has utilized every device to crowd the reels with action, thrills, surprises and some beaucoup camera work that is not often seen in a serial. The story is a hummer, with Harry Carey as the contractor engaged to drill an oil well on a property that seems to have a jinx. Mysterious forces are at work on the oil field. Harry starts with a fleet of trucks loaded with machinery and equipment. Then you see the gang at work, with several different groups all endeavoring to stop the hero, also to get their hands on a certain mysterious person who knows some damaging evidence against them. This person is the father of Frankie Darrow. Frankie and his dad secrete themselves in one of the trucks to escape the sheriff. The trucks are wrecked by the gang, who destroy the brakes, and they go crashing over the side of a precipice. This is a big thrill scene, with the runaway trucks careening down the side of a mountain and the drivers jumping for their lives. This bit has been realistically handled, and packs a terrific wallop. In fact the first two chapters caught are replete with fine bits of this calibre that will have the fans hanging onto their seats. Frankie Darrow does splendid work in a strong part. His acting on the death of his father is as good a bit as any juvenile has ever done on the screen. Can’t miss on this one. It should pack ’em in––kids and grown-ups, who like their thrills fast and plenty.”––The Film Daily, August 2, 1931

Posted by Arizona's Little Hollywood at 8:44 AM