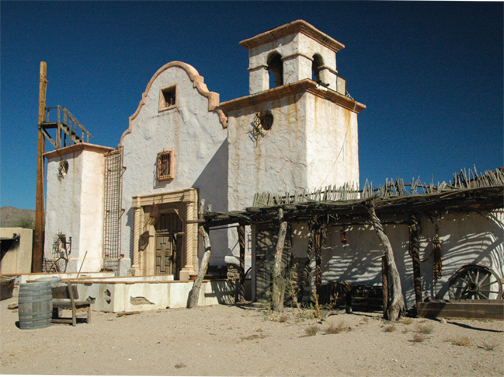 “When in Southern California, visit Universal Studios.” That was the pitch Universal used back in the 1960s to cross-promote its La-La Land backlot tour in print ads, and later (to the chagrin of some of its snootier directors) in the end titles of its movies. Since 1915, the allure of making the scene at a working film studio has provided a cushy side business for Universal, but if you have a hankering to visit a movie factory, head to southern Arizona’s very own historic studio, Old Tucson.
Old Tucson Studios was originally a western town set built by Columbia Pictures in 1939 for its $2.5 million Oscar-nominated epic, Arizona, which starred Jean Arthur and William Holden (in his cowboy movie debut). The structures were left standing after the completion of shooting and were reused sporadically – at the bargain basement rate of $60 per day – for cowboy extravaganzas like the partly filmed-in-Sedona 3:10 to Yuma (1957), The Lone Ranger and the Lost City of Gold (1958) and Rio Bravo (1959). Midwestern businessman Robert Shelton leased the property (John Wayne, who would shoot four Westerns at Old Tucson, was reportedly among his silent partners) and opened it to the public in 1960 as a movie studio/mini-amusement park, offering set tours, live stunt and musical shows, gunfights and a small area with rides and attractions. Shelton eventually built “Arizona’s Hollywood in the Desert” into what was dubbed the second-most-visited tourist destination in Arizona after the Grand Canyon. In 1968, a 13,000-square-foot soundstage was opened to allow Old Tucson to provide its Hollywood clients complete on-site filmmaking facilities. Later pictures shot at the studio ran the gamut from the avant-garde (Andy Warhol’s Lonesome Cowboys, 1968) to blockbuster actioners (Tombstone, 1993). In 1970, Wild Rovers, another partly made-in-Sedona Western, did a single day of exterior filming at Old Tucson, with William Holden making his first return visit 31 years after he helped open the studio. 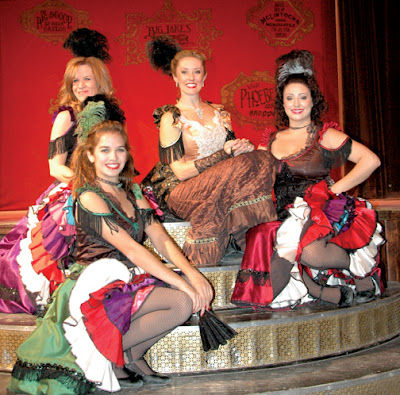 Only Los Angeles and New York could brag louder than Old Tucson about being the most popular filming location in America until real-life disaster struck in 1995, when approximately 40 percent of the original movie buildings were destroyed in a fire that investigators labeled “suspicious.” But, just like in the movies, good triumphed over evil; the studio soon reopened for business (albeit at three-quarters of its original size) and it remains a working film location today. Since 1939, more than 500 movie and television projects as well as dozens of TV commercials, music videos, industrial films and print photo shoots have been made at Old Tucson Studios.

Getting there is half the fun. The studio lies within Tucson Mountain Park, which borders the biologically diverse (and awesome looking) Saguaro National Park, so the drive through the lush Sonoran Desert provides an eyepopping look at the never-ending forest of ginormous cacti. Even there you’ll find a movie connection: The 2009 dramedy Away We Go, with John Krasinski and Maya Rudolph, filmed a sequence at this scenic spot. 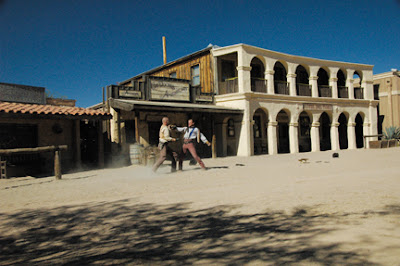 Once inside the studio walls, you’re standing in the dusty bootprints of cowboy movie Shangri-la, so the 30-minute historic walking tour is highly recommended as the ideal way to soak it all in. On the day we visited, we were fortunate to have our tour conducted by the very knowledgeable historian Paul J. Lawton, who could write a book on the place (actually, he did: Old Tucson Studios, Arcadia Publishing, $21.99).

Among the movie-related attractions is a 20-minute film commemorating John Wayne’s connection to the studio, a continuously running video history of Old Tucson, and a mini-museum that displays posters, props and costumes from many of the movies and TV shows shot there. Also on the lot is the Reno, a 34-ton locomotive built in 1872 that has been used in dozens of films and is considered to be the most photographed train engine in the history of motion pictures. Red Rock Country film fans please take note: Just beyond the Reno stands the actual “Contention” train station that the original 3:10 to Yuma pulled into in 1957. This hitch means there is exactly one more historic Sedona movie set at Old Tucson Studios than the former “Arizona’s Little Hollywood” has within its entire city limits.––Joe McNeill;  originally published in the January/February issue of Sedona Monthly. Photographs © 2011 by Debbie Weinkauff

Posted by Arizona's Little Hollywood at 9:14 AM