Jerry Hartleben: From 'Yuma' to Sedona


The original version of 3:10 to Yuma spent two days in Sedona in late 1956 filming a few exterior scenes. Jerry Hartleben, who played costar Van Heflin’s son as a 10-year-old, didn’t have any scenes here then – but he now calls Sedona home. While he acted in a few films (most notably, he played Lon Chaney as a boy in 1957’s The Man of a Thousand Faces), it was never his passion—that was photography. He went on to become a respected cinematographer, working on feature films (Wilder Napalm, 1993), television series (thirtysomething), and commercials. Over lunch in September 2007, Jerry talked about working on Yuma, and how acting prepared him for a career behind the camera.–Joe McNeill

JM: Did you like working with director Delmer Daves on 3:10 to Yuma?

JERRY HARTLEBEN: He was great. He included me in... every night before the next day’s filming he would get the actors together and have a little rehearsal for the next day. He got me involved, and I thought that showed a lot of respect. He listened to me, I still remember that. He, as a director, gave me respect as a kid. I sure liked him.

Did you ever see Glenn Ford again after 3:10?

No. Over the years I wanted so much to film Glenn Ford because he did a series of [car] commercials in the late ’80s-early ’90s, and a big, big part of my career was commercial photography. I did major big-budget commercials all over the world and my specialty was cars. So I always wanted to do a project with Glenn Ford; I thought it would be really great to film him. But it never happened.

Did the Sedona  connection with Yuma come to mind when you moved there? 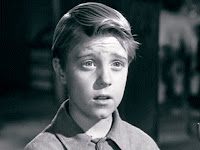 I don’t think I knew 3:10 to Yuma was shot in Sedona until the first time I saw the DVD. Maybe I knew, but I didn’t put it together; Sedona standing in for Bisbee is kind of weird. I knew they filmed at different parts of the state; I was only in the scenes that took place in an area called Texas Canyon, that’s where the ranch was. There wasn’t too much shot [in Sedona]. A couple of pan-bys, a couple of shots of the swinging doors, and then they would cut to the stage in Hollywood on the reverse side. Sedona was intercut with parts of southern Arizona. They go through the Sedona forest, the junipers and the pines and then the cactus and big boulder rocks [down south]. It wasn’t jarring, they were able to make it seamless.

I think the new 3:10 to Yuma is a fantastic film, but there’s a shot in the original movie that [remake director] James Mangold didn’t get anywhere near. It’s the scene in the bar. Probably because he was restricted and couldn’t take them into bed back then, all Delmer Daves had to deal with was The Look. If you watch the film again, there’s a shot where she [Farr] turns and looks into his [Ford’s] eyes. It’s an extremely close shot of her face, and her eyes are tracking back and forth and the music hits it. It’s the sexiest scene. I didn’t find the scenes with the bar lady [in the 2007 version] done with any of the import that Delmer Daves got out of that one close shot, which was an extremely unusual shot for its time. But the ending of the new movie blew me away. It transcended the original idea and became something else. It’s a real shocker.

When you were on the set as a kid, were you interested in photography?

I was always interested in the camera. On The Buccaneer [1958; starring Yul Brynner, supervised by Cecil B. DeMille and directed by Anthony Quinn] because I had so much time – it was, like, six months – if I wasn’t needed that day, I’d still go there to school, or I’d have to wait maybe [to do] one scene at the end of the day. So I had free time. The studio had a photographer – and these were all master photographers assigned to each production on the lot – who would record the shoot all day, and when he saw that I was interested in what he was doing, I started to basically take a course from him for six months. We would go out to the backlot every day when I finished filming. The backlot had everything; there was a western street, there were pirate sets, you name it. And we would just shoot. [Photography] became my career. I always loved it. ––Originally published in the November 2007 issue of Sedona Monthly
Posted by Arizona's Little Hollywood at 8:50 AM