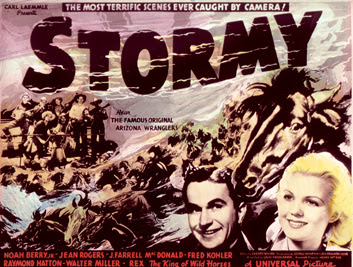 Chances are good that if you live in Sedona, you don’t believe in coincidence. Just ask Jayne and Phil Feiner, who have lived in the Village of Oak Creek for two years. Phil lost touch with his grandfather after his mom passed away, and for the past 14 years, Jayne has been on a mission to find out anything she can about James (Jimmy) Phillips. Imagine her surprise when she opened Arizona’s Little Hollywood: Sedona and Northern Arizona’s Forgotten Film History 1923-1973 and found a photo of Jimmy Phillips staring back at her.

Jimmy Phillips worked at Universal Pictures until he retired in 1959. Jimmy was a livestock wrangler and extra who eventually became head animal wrangler for Universal; according to Jayne, he taught Francis the Talking Mule how to talk and Clint Eastwood how to ride a horse for TV's Rawhide. His wife worked as a stuntwoman. “We knew little things about him, and about five or six years ago, I started researching him on IMDB [Internet Movie Database],” says Jayne. “That’s when I realized that he worked under the name Jimmy.”

This past Father’s Day weekend, Jayne and Phil sat down to watch Broken Arrow, filmed in Sedona in 1949, and followed along with Arizona’s Little Hollywood. On a whim, Jayne looked up Universal Pictures in the book’s index, and then opened to the chapter on Stormy, filmed by Universal in 1935. That’s when she found the photo of Jimmy, who had an uncredited role as a cowhand. “He must have been about 35 at the time, and he looks exactly like my husband,” she says.

While Jayne and Phil, who own PJF Productions – a post-production company in Studio City, Calif. – have letters Jimmy wrote to family members while he was on location along with a few black-and-white photos, they never realized he filmed a movie in Sedona until they were already living in Red Rock Country. Jimmy died in 1974, and Jayne is still trying to track down information about his ethnic heritage. Until then, the couple takes heart in knowing “Grandpa” once looked at the same red-rock vistas that are now out the Feiners’ back door.

“It’s a weird connection,” says Jayne, “and it’s even more bizarre that out of all the stills taken from Stormy, Joe chose the one that includes Jimmy.” – Erika Ayn Finch. Originally published in the November 2010 issue of Sedona Monthly
Posted by Arizona's Little Hollywood at 6:39 PM