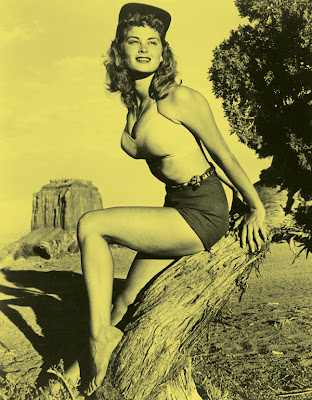 Bet this photo grabbed your attention! The babe is Irish McCalla, 5' 9 1/2" pin-up glamazon and future star of TV's Sheena, Queen of the Jungle, seen here lounging in front of the slightly more statuesque but not nearly as sexy Merrick Butte in Monument Valley. This shot was probably snapped by prolific girlie magazine photographer David Sutton in September 1950 during the filming of River Goddesses, an indie travelogue that documented the adventures of five curvalicious pin-up models taking a sightseeing trip down the Colorado River in wooden rowboats. Footage from this obscure feature film hasn't been seen in decades, but based on the evidence of this picture, the goddesses also made a detour into bone dry Navajoland to pay a visit to John Ford's neighborhood in Arizona's Little Hollywood.

River Goddesses has one heck of an oddball pedigree. Its believed to have been produced by a Hollywood company called Capital Enterprises, which may or may not be the same outfit that later distributed Crusader Rabbit, the first made-for-TV cartoon series. It was directed by former German Communist Party member Carl Junghans, one of the leading documentary filmmakers of the Weimar period, who jumped sides in the '30s to work as a writer/director/editor for Nazi Germany's Reich Ministry of Public Enlightenment and Propaganda. His documentary short Jugend der Welt (Youth of the World) received the Coppa dell’Istituto Nazionale Luce award at the 1936 Venice International Film Festival, the same year that the partly photographed-in-Sedona Nazi Western Der Kaiser von Kalifornien won the Mussolini Cup as best foreign film. After falling into disfavor with Hitler, Junghans hot-footed it to the United States, where he worked as a gardener and landscape photographer. In 1946, he made a comeback as a filmmaker to write, produce and direct a pair of short documentaries about Monument Valley: Memories of Monument Valley and Monuments of the Past, the latter movie narrated with typically stiff upper lip aplomb by British actor Herbert Marshall. Junghans (disparagingly monikered “the Colonel” by Goddesses’ crew) was reported to have been a somewhat less-than-charming Teutonic misogynist; forty-three years after working with him, McCalla recalled to author Richard E. Westwood that he "openly said women should be kept in concentration camps for breeding purposes only: that's all we were good for."

Four boats carrying the Goddesses gang shoved off from Hite, UT, at the northeast end of Lake Powell, and went ashore for numerous photo ops along the Colorado before landing at Lee's Ferry, Ariz., 7.5 miles southwest of the town of Page, Ariz., and the Glen Canyon Dam. Joining McCalla in the on-screen escapades were shipshape mates Becky Barnes, Lee Moi Chu, Irene Hettinga and Martha Moody; with the exception of Chu, who later did walk-ons in a pair of clinkers released by major studios (Universal-International's Forbidden and United Artists’ Dragon's Gold), the other models booked return passage into obscurity at the end of the nearly monthlong cruise.

The see-worthy sirens were chaperoned during the excursion by pioneering female river-running guide Georgie White Clark, who told Northern Arizona University researcher Karen Underhill in 1991 that the travelogue wasn't really about the scenery, but "was more to show the girls... they just showed the beauty of the girls more than anything. I mean, the thing was [they] really wanted to show more of that as they hiked around, which they did, up to Rainbow Bridge and all––[it was] more to show their beauty while they were doing it."

In her 1977 autobiography, Georgie Clark: Thirty Years of River Running, she recalled a Goddesses “action sequence” that featured Irish McCalla: “Next, they had Iris [sic] walk along the top of the cliff. Actually, it was just a little spot outside of camp. Next she fell and grabbed the top of the cliff. Next scene, the camera zoomed in to show her hanging hundreds of feet above the river. I almost died laughing over that one. They actually made that girl hang from the top of that little rock with her feet barely a foot above the ground. All she had to do was let go and drop easily to safety.” The march of time hadn’t dimmed Clark’s memory of Herr Junghans, either. “The first thing the director did after they unloaded [his boat], was to pop down in his chair on the beach and order martinis. I remember watching him drink that martini and thinking, ‘Boy, this is going to be some trip.’”

The idea for the cinematic nautical tour was apparently dreamed up by cameraman Sutton, who photographed the movie and at the same time snapped cheesecake stills of the frolicking short-shorts and bikini-clad bombshells to peddle to various “gags and gals” rags, like Brief, Peril, and Laff. The slightly classier Night and Day (modestly taglined "America's Picture Magazine of Entertainment") published shots from the trip for years; photos even showed up in the big circulation and appropriately named Look magazine, which ran a five page pictorial titled "Six Girls Against the Colorado" in its May 8, 1951 issue. Unfortunately, these titillating images are all that remain of River Goddesses. Every frame of it has vanished and there are no posters, newspaper ads or other types of publicity materials to be found anywhere. This lack of a paper trail could be telltale proof that the film never made it into theaters, although Georgie Clark claimed that she saw it once, so its a good bet that the movie was actually completed before it sank into oblivion.

Prior to making her invisible big screen debut in River Godeseses, Irish McCalla was one of the triumvirate of post-war American pinup superstars, along with sister va-va-voom icons Betty Brosmer and Bettie Page. Her filmography consists of just six post-Sheena features, mostly low-budget drive-in schlock like The Beat Generation, Hands of a Stranger, and She Demons, the cheesy 1958 grindhouse classic in which she portrayed a haughty society girl who washes up on an uncharted tropical island inhabited by a love-frenzied mad scientist, renegade Nazi storm troopers, sloppily made up zombie women and a bevy of over-rehearsed hoochie coochie dancers.

McCalla moved to Prescott, Ariz., in 1982 to devote her time to painting, her first love. She was the subject of numerous gallery exhibitions in Scottsdale, Ariz., and a longtime member of Women Artists of the American West; her paintings are even in the permanent collection of the National Cowgirl Museum and Hall of Fame. But it is her brief reign as pulp pinup queen that has made Irish McCalla immortal; the river goddess was named one of “The Top 100 Sex Stars of the Century” by Playboy magazine in January 1999.––Joe McNeill
Posted by Arizona's Little Hollywood at 7:04 AM