'Kingdom of the Spiders' Reunion 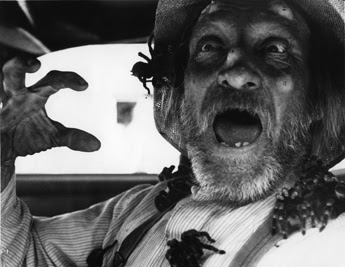 In 1977, spiders – and William Shatner – invaded Camp Verde, Arizona, for the filming of the B horror movie Kingdom of the Spiders. It’s a claim to fame the town embraces, so on Oct. 29, the Second Annual Kingdom of the Spiders Reunion takes place at the ball field behind Camp Verde Town Hall. The fun starts at 3 p.m. with music and a barbecue. At 6:30 p.m., the movie will be shown on a 30-foot screen. Admission is free.

“It’s a really good bad movie,” says Steve Goetting, who organized the reunion along with his wife, Barbara. “It’s very dated, but downtown Camp Verde is recognizable. The scenery is recognizable and the buildings are recognizable. There are even scenes filmed in Sedona, though Sedona is referred to as Camp Verde. This really is a part of the Verde Valley’s history.”

Last year, more than 700 people showed up for the reunion including dozens who were extras in the film. Since Kingdom never played in Camp Verde, many people were seeing themselves on the big screen for the first time. “There was lots of cheering – the crowd was thrilled,” says Steve, who also organizes the Camp Verde Pecan, Wine and Antique Festival and who owns The Horn Fine Wines and Craft Brews. “There were kids from the high school in the movie and now they are adults, but they recognized themselves.”

Though Steve extended invitations to the movie’s stars, including Shatner and Tiffany Bolling, don’t expect any big names at the event. You can, however, expect a mini museum featuring Kingdom memorabilia such as photos, newspaper clippings, stencils used to paint larger-than-life spiders on building walls and plastic spiders. An arachnid-lover will also be on hand with a collection of live spiders. Bring your lawn chair, snacks (no alcohol) and a sweater for the movie screening (popcorn and soda will also be sold). Look for a Kingdom of the Spiders float in this year’s Fort Verde Days Parade on Oct. 8. – Erika Ayn Finch. Originally published in the October 2011 issue of Sedona Monthly

Second Annual Kingdom of the Spiders Reunion, Oct. 29 at the ball field behind Camp Verde Town Hall (395 S. Main St. in Camp Verde). The fun starts at 3 p.m. with a movie screening scheduled for 6:30 p.m. Free. For more info, call 800-827-1160 or visit www.kingdomofthespidersreunion.com.

Posted by Arizona's Little Hollywood at 9:03 AM