Lone Pine is a dot on the California map, but it’s the town where manly movie legends, like John Wayne, Clint Eastwood, Errol Flynn, and Robert Downey Jr., made scenes during visits. Still, even with the cavalcade of stars spied hoofing Lone Pine’s Main Street over the past 90 years, it’s a good bet some people would never make the connection between glamorous Hollywood and the unpretentious hamlet located 177 miles north of Los Angeles (and 65 miles west of arid Death Valley National Park) at the foot of Mount Whitney, the tallest mountain in the lower 48 states. But it’s a completely different story for movie geeks – they get goose bumps at first glimpse of the town’s most distinctive landmarks: those surreal Daliesque boulder formations of the Alabama Hills just outside of town. Pilgrim, this is an iconic pop culture landscape, and not only for big men wearing big hats and riding even bigger horses; just about everyone who’s who in Tinseltown action movies has been captured on film in front of these rocks, from roly-poly silent movie comic Roscoe “Fatty” Arbuckle to blockbuster comic book hero Iron Man. Not to take anything away from our own beloved Arizona’s Little Hollywood, but with a résumé of almost 400 feature film appearances (including two credits shared with Sedona, Der Kaiser von Kalifornien and Broken Arrow) plus dozens of TV episodes and commercials, Lone Pine is arguably the most popular outdoor location in the history of movies.

That’s a pretty good reason for the town to pat itself on the back, so for more than two decades residents have thrown an annual shindig to commemorate their ongoing cinematic history. And this year’s Lone Pine Film Festival, taking place Oct. 7-9, is shaping up to be a three-day cowboy movie bonanza.

Among the archival films scheduled to be shown are The Stolen Ranch (1926) and Blazing Days (1927), a pair of rarely seen silent Westerns made in Lone Pine by William Wyler, the Oscar-winning director of The Best Years of Our Lives and Ben-Hur. Sam Peckinpah’s 1962 classic Ride the High Country, with Randolph Scott and Joel McCrea, will also be screened, with several people involved in making the film slated to be present.


One of the themes of this year’s festival is a celebration of the 100th birthday of Lone Pine action figure Roy Rogers, and among the gifts to be unwrapped is a rare screening of Macintosh and T.J., the King of the Cowboys’ final film (made in 1975), with some of the cast members scheduled to appear at the party. As usual, there will also be hours of classic Westerns starring other B-movie big shots like Hopalong Cassidy and Gene Autry in picture shows that offer lavish views of Lone Pine, Death Valley and the Eastern Sierra. Best of all – and this is what sets apart the Lone Pine Film Festival from, say, the vastly overrated festivals at Sundance or Cannes – after watching the movies you can take guided tours of the locations you just saw on the big screen. How cool is that?

Festivalgoers won’t just spend the weekend losing their tans in a darkened screening room because there are plenty of other activities going on, like in-person celebrity panels, live Western street theater, musical shows, a rodeo, an arts-and-crafts fair and the Parade of Stars down the main drag. Action scenes won’t be confined to celluloid, either; look for live stunts in a show spotlighting the machismo talents of Diamond Farnsworth, stunt coordinator for TV’s NCIS, and Loren James, the veteran stuntman whose 300-plus film credits include McLintock!, Bullitt and Planet of the Apes. Other notable guests will include Republic Pictures’ leading ladies Peggy Stewart, Donna Martell and Marie Harmon, who’ll recall their days toiling in the Hollywood Thrill Factory. Wyatt McCrea (grandson of actor Joel McCrea), Peter Ford (son of actor Glenn Ford) and Cheryl Rogers-Barnett (daughter of Roy Rogers and Dale Evans) will reminisce about their illustrious family trees. 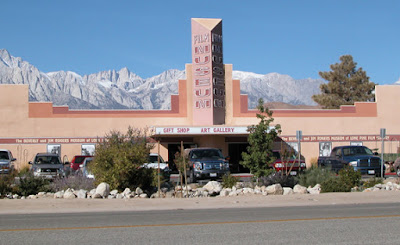 Screenings and events take place at various venues around town, including at the festival’s most important outgrowth, the Beverly and Jim Rogers Museum of Lone Pine Film History. The 10,500-square-foot nonprofit archive displays Lone Pine movie artifacts, posters, props, costumes and other memorabilia. It also boasts a 85-seat theater that regularly screens hard-to-see films. Most vital, the museum is far more than a depository of black-and-white nostalgia. Since opening in 2006, it has compelled thousands of tourists year-round to visit isolated, dot-on-the-map Lone Pine, and that’s the best legacy movie history can bequeath a location town. Paying attention, Sedona?––Joe McNeill.

Posted by Arizona's Little Hollywood at 8:47 AM