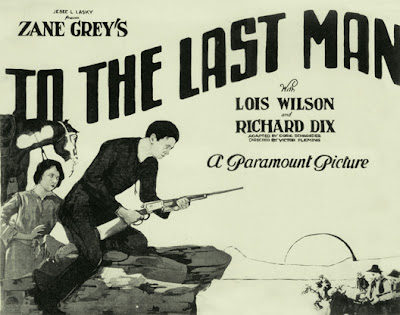 Arizona’s Little Hollywood, the definitive history of the starring role Sedona played in the movies, focuses on the high desert country that stretches from Oak Creek Canyon to Monument Valley to the Grand Canyon (ground zero for filmmaking in northern Arizona), which effectively put the kibosh on detailed coverage of any films photographed in other parts of the state. So the making of 1923’s To the Last Man – big brother movie to The Call of the Canyon, the first one to have a Sedona pedigree – is given just a quick once-over because it was shot in central Arizona, about 50 miles southeast of Red Rock Country. This long-lost silent film may be a ghost, but it didn’t take all its secrets to the grave. The backstory of To the Last Man, which hit theaters while virtually the identical cast and crew was in Oak Creek Canyon to shoot The Call of the Canyon, deserves to be remembered as the prequel to Sedona’s rise as a popular movie location. Consider it the lost chapter of Arizona’s Little Hollywood; here’s the first of an 11-part series that completes the story.

Last Man, like Call, was based on a novel by Zane Grey, and it kickstarted a long-term deal with Paramount Pictures that would, in the minds of some critics, result in the best films ever made from his writings. But for Grey, a former dentist who became one of the most popular authors of the 20th century, success in the movies didn’t come painlessly. In 1916, after two years of trying to rustle up interest for his books in Hollywood, he sold all rights forever – including for television, which may have seemed about as likely to ever happen as landing a man on the moon – to Riders of the Purple Sage, The Rainbow Trail, The Last of  the Duanes and The Lone Star Ranger to Fox Film Corporation. But it wasn’t long before he was kicking himself for having let them go for a measly $2,500 apiece. It was crystal clear that there was a lot of money to be made adapting his work to the movies, so in 1918 he decided to cut out the middleman and make the films himself, forming Zane Grey Pictures Inc. in partnership with producers Benjamin B. Hampton and Eltinge F. Warner. It must have struck Grey as a no-lose proposition; he would retain ownership of his stories, oversee the content of the films and share in their profits, but not have to actively participate in making them. 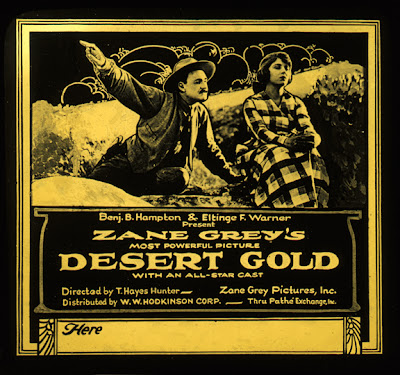 Audiences lined up to see Zane Grey Pictures’ first release, Desert Gold (1919), based on his 1915 novel; Motion Picture News reported it did such boffo business that a few sly exhibitors took advantage of public demand to see it as a sneaky way to permanently raise ticket prices. Mysteriously, even though Grey was now calling the shots, his longstanding wish to have his novels filmed at the exact locations he wrote about (a request that consistently fell on deaf ears at Fox Film) was ignored for this one, too; most of Desert Gold was photographed in Palm Springs, Calif., even though his original story was set on the Arizona-Mexico border. Still, Grey seemed to be satisfied with the way his initial dabbling into the movie business had turned out. Advertising included his portrait and signed testimony that “The producer has put the spirit, the action and the truth of Desert Gold on the screen. My ideas, my wishes – even my hopes – have been fulfilled.”–––Joe McNeill © 2011 Bar 225 Media Ltd.
Posted by Arizona's Little Hollywood at 7:32 AM

Email ThisBlogThis!Share to TwitterShare to FacebookShare to Pinterest
Labels: Film History, Monument Valley, Paramount Pictures, Riders of the Purple Sage, Sedona, The Call of the Canyon, The Last of the Duanes, The Rainbow Trail, To the Last Man, Westerns, Zane Grey